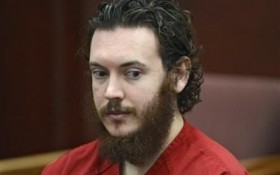 Colorado theater shooter James Holmes was transferred to another prison partly because another inmate pushed his way through a partially open door and attacked him, according to prison officials and documents released Thursday.

Holmes was coming out of an office with a case manager when a corrections officer opened a door to the area. The other inmate pushed his way through as officers tried to close it, according to documents detailing the October incident. The inmate hit Holmes in and around the head before officers pulled them apart. The inmate also struck the case manager in the face during the struggle.

The attack happened at the state’s highest security prison, the Colorado State Penitentiary, at a time when Holmes was being closely monitored and held in a pod by himself while prison officials sought more suitable housing for him.

Holmes wasn’t seriously injured in the attack, but it was among many reasons officials transferred him to a different prison in January, Colorado Department of Corrections spokeswoman Laurie Kilpatrick said.

Holmes was convicted in August of killing 12 people and injuring 70 more when he opened fire in a crowded Denver-area movie theater in July 2012. Jurors could not agree that he deserved the death penalty, so he is serving a life prison sentence.

Prison officials believed other inmates were likely to continue to target Holmes “because of the high profile nature of his crimes,” according to the documents, which were first reported by ABC News.

Officials refuse to reveal where Holmes is located, even to the families of his victims. The move, which sent him out of state or to a federal facility, was part of an exchange agreement with another prison. Officials refuse to provide details of the trade.

The inmate who attacked Holmes has received money and letters from strangers praising him, according to the documents.