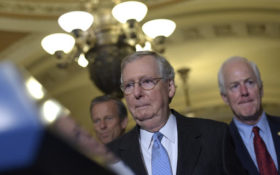 Senate Majority Leader Mitch McConnell has made his strongest statement yet on his party’s presidential nominee, telling a rally in his home state Wednesday that “we need a new president, Donald Trump, to be the most powerful Republican in America.”

McConnell has warned repeatedly that Republicans could lose control of the Senate this year as they are forced to defend a handful of seats in swing states across the country. Since endorsing Trump shortly after he secured the nomination, McConnell has been mostly silent about the nominee so that vulnerable incumbents — like New Hampshire’s Kelly Ayotte — could distance themselves from Trump and his increasingly erratic comments. McConnell even told a group of business leaders at a recent speech that if they wanted to hear him discuss Trump, they “might has well go ahead and leave.”

But speaking in a cavernous tractor dealership in central Kentucky on Wednesday night — where McConnell was introduced as the “most powerful Republican in the world” — the senator went all in for Trump before a small but enthusiastic crowd.

“If America votes like Kentucky, we’ll be fine,” McConnell said.

While McConnell has not been eager to discuss Trump, he has had plenty to say about Hillary Clinton and Barack Obama. His decision to block Obama’s Supreme Court nominee has emboldened members of his party. Some, including John McCain of Arizona and Ted Cruz of Texas, have vowed they would not confirm any Democratic nominees, leaving the court with eight members.