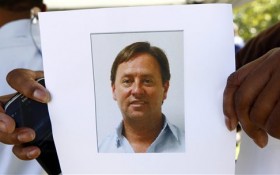 Shannon Lamb, a college instructor at Delta State University in Mississippi, had a chilling message to the cops – he wasn’t going to be taken alive.

And after allegedly killing a colleague and another woman yesterday — and triggering a massive manhunt — Lamb took his own life as police closed in.

Investigators said Lamb, 45, was a suspect in the Monday slayings of 41-year-old Amy Prentiss, who was found dead in the home she shared with Lamb in Gautier; and 39-year-old Ethan Schmidt, a history professor who was killed in his office on the Delta State campus in Cleveland, 300 miles away.

Officers in the two cities said they had not uncovered a motive for either slaying. But Fox News reported yesterday that this horrific series of events could be the result of a love triangle gone wrong.

After a day-long manhunt, police in Greenville, Mississippi, were following Lamb as he was driving when the suspect pulled over and jumped out of his car, Lynn Buford, chief of the Delta State University police, told The Associated Press.

Police later heard one gunshot and then found Lamb, Buford said. They took him to a hospital in Greenville where he was pronounced dead of what appeared to be a self-inflicted gunshot wound, Buford said.

Lamb’s death brought to an end a chaotic day that saw terrified students and teachers hunkered down in classrooms for hours. The Delta State campus was put on lockdown as armed officers methodically went through buildings, checking in closets, behind doors and under tables and desks.

University President William LaForge told the AP late Monday that the lockdown had been lifted. He said there would be no classes Tuesday but students, faculty and staff are invited to campus to attend a vigil in the evening to honor the staff member who was killed.

“We’re relieved that this tragedy is over,” LaForge said.

Gautier Police Lt. Scott Wilson said during a news conference Monday that police had spoken with Lamb before his death.

In the news conference, broadcast on WLOX-TV, another officer who was not identified said anyone coming into contact with Lamb should use extreme caution: “His statement was that he was not going to jail.”

The slain professor, Ethan Schmidt, directed the first-year seminar program and specialized in Native American and colonial history, said Don Allan Mitchell, an English professor at the school, who called him “a gentleman in every sense of the word.”

“Dr. Ethan Schmidt was a terrific family man, a good friend, a true son of Peabody, Kansas, and his beloved Emporia State University,” he said.

One of his history professors at Emporia State University described him as one of the “brightest students” she’d ever taught.

“He was a super competent human being. He was president of his fraternity, in student government. He was an absolutely delightful student,” said Karen Manners Smith.

King, one of the students in Jobe Hall when the shooting happened, attended the same Episcopal church as Schmidt. King was studying history, and Schmidt was his adviser.