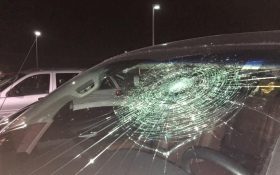 A minor league baseball player in southern Illinois hit a grand slam homerun only to find the ball smashed the windshield of his own truck.

The Gateway Grizzlies of Sauget (SAW-zhay), Illinois, say Brandon Thomas hit the homer during Sunday’s game against the Joliet Slammers. The 25-year-old outfielder sent the ball sailing into the parking lot, where his 2008 black Toyota Tundra was parked.

Thomas says he didn’t realize what happened until players in the dugout were laughing a couple of innings later and told him.

Thomas says after the game he “went out there and saw the damage that (he) had done.” He says the truck was parked 60 feet behind the left field wall.

Thomas says a couple of people have offered to fix the windshield for him.