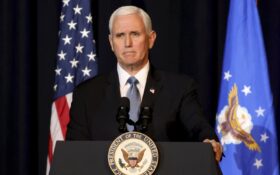 Former Vice President Mike Pence may have made the sneakiest presidential announcement in the history of Republican primaries, according to at least one GOP campaign veteran.

The federal government announced that Mike Pence filed “a statement of candidacy” to run for president of the United States in 2024. The appropriate paperwork was filed with the Federal Election Committee (FEC) one day after Christmas.

An online copy of the December 26 statement lists the candidate’s name as “Mr Mike Richard Pence” with an address in Anderson, Indiana.

Maggie Haberman, the anti-Republican reporter at The New York Times, tweeted, “Someone filed a Pence filing. But it wasn’t Pence, his spokesman says, suggesting it was a prank.”

Reporters immediately wanted answers, which were not immediately forthcoming from Pence’s team.

“Did someone prank you with an FEC filing?” asked Greg Price, who reported the filing on the social media site.

“I think someone pranked you,” responded O’Malley.

When a political adviser to past Republican presidential campaigns asked if Pence had this on his bingo card, O’Malley didn’t deny that Pence would announce for the presidency. He just questioned the announcement’s timing.

“I didn’t have it on my Bingo card for ANY of the days between Christmas and New Year,” said O’Malley, who pointed out that former VP “Pence has been saying that if there was an announcement to be made, it would made in 2023!”

Pence’s spokesperson never questioned that Pence would run for president; he seems to be arguing over a time frame of six days.

But there is one major way that having a “false” presidential announcement filed at the FEC would help Pence’s campaign—if he chooses to launch one, that it: It would give him the element of surprise.

Provided the information on the filing is correct, Pence may not have to file another notice to enter the 2024 GOP presidential race. Political reporters, and rival campaigns, watch those filings like a hawk to plan their next moves.

That means Pence’s political opponents would have no advance notice that he plans to throw his hat in the ring against them in two years. They would not be able to time their attacks for his announcement.

Pence could simply announce for president, blindsiding the opposition.

It's Fugazi ! FEC " filing" of Mike Pence is a fraud. Pence, widely despised outside the beltway has ZERO chance of becoming the 2024 Republican Presidential nominee #dirtytrick @dcdraino @MarkAVargas pic.twitter.com/2BonQg759l

The former vice president has clearly been moving toward a 2024 showdown with his former boss. Most recently, Pence released his tell-all memoirs and granted several interviews, where he’s been openly critical of his ex-running mate.

Keeping his official presidential ambitions murky has been a trait of Mike Pence, possibly a campaign strategy.

Pence has dodged questions about his 2024 intentions for months. “We’ll go where we’re called,” Pence answered when The New York Times asked him about a presidential run in May. When another reporter asked Pence if he would back Donald Trump in 2024, Pence answered enigmatically, “Well, there might be somebody else I prefer more.”

Political commentators took that as an admission Pence planned to throw his hat in the ring in 2024—but Pence kept his response vague.

“In terms of our role [in the Republican Party], I can tell you we are going to give prayerful consideration to what role we might play in the months and years ahead as we gather over the Christmas holidays,” Pence told Breitbart News in November.

America has “better choices in the future” than President Trump, Pence added.

He’s not the only one playing his cards close to the vest. The 2024 Republican presidential primaries could include a crowded field, including everyone from Gov. Ron DeSantis of Florida, Senator Tim Scott of South Carolina, former State Secretary Mike Pompeo, former UN Ambassador Nikki Haley, Sen. Josh Hawley of Missouri, Gov. Greg Abbott of Texas, Gov. Ron DeSantis of Florida, Gov. Kristi Noem of South Dakota, and Gov. Glenn Youngkin of Virginia.

No one wants to be first to declare he’s running against President Donald Trump, and take the full brunt of his legendary personal insults and mean social media tactics alone.

That may be doubly true for Pence, whom polls show is one of America’s most hated politicians.

But who filed the form? The FEC did not respond to requests for comments from The Hill. But the official FEC form says it was “signed by the candidate.”

All it takes is for a handwriting analyst to know whether this was a prank on Pence or by Pence.

Who filed the form?