Poll: The most hated politician in America is... - The Horn News 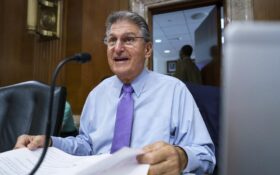 It’s hard to think of many people less lovable than politicians—but even among the flesh-pressing Swamp creatures, some are more likable than others. And a new poll shows that there is one trait voters despise more than any other: betraying your party’s base.

The politician’s voters love to hate more than anyone else are West Virginia Senator Joe Manchin and former Vice President Mike Pence.

About a third of voters hate “the other Joe” in Washington, D.C., according to a poll released on from Hart Research Associates. A total of 34 percent of people dislike the West Virginia Democrat, and only 11 percent hold a favorable view of him—leaving him with an overall net negative score of 23 points.

That’s a lower score than anyone else in Washington—the president, vice president, former president, and the Supreme Court.

Worse yet, the poll reveals that Manchin is hated by voters across the political spectrum: Left, Right, and center.

Four out of every 10 Democrats hates the most conservative member of their party. The party, which has been drifting leftward for several elections, has made no secret of its disdain for Manchin’s centrism. Manchin is pro-life, has vetoed plans to fund Planned Parenthood, and is holding up such major parts of Joe Biden’s agenda as the Build Back Better Act over concerns it would drive up inflation.

But 31% of Republicans also dislike Manchin, the only Democrat to hold statewide office in now deep-red West Virginia. Although Manchin has sided with Republicans on Biden’s biggest spending bills—and Senate Minority Leader Mitch McConnell (R-Ky.) has regularly invited Manchin to cross the aisle to the GOP—he just stabbed Republicans in the back by helping Joe Biden push through the so-called “Inflation Reduction Act.” Although Biden and Senator Chuck Schumer (D-N.Y.) originally said the bill would reduce inflation (by spending more money), Democrats now call it a “climate change bill.”

And 30 percent of registered independents dislike Joe Manchin, because they thought he was one of them… but he’s recently shifted to backing the Democratic agenda, at least for now. That’s a career-long habit for Manchin, a former West Virginia governor now in his second full term as a U.S. senator.

Coming in a close second is Mike Pence. The former vice president is opposed by 44 percent of voters. That’s way up from 28 percent just before the 2016 election. Meanwhile, Pence is loved by only 25 percent of voters today, giving him a net negative of 19 points.

Pence’s negatives, which began to soar after he clashed with President Donald Trump over claims of election fraud in 2020, have gone into overdrive as he continues to pick a fight with his former boss. Pence even said at one point that he would “consider” testifying before the Jan. 6 Commission, which some Never-Trump Republicans see as a kangaroo court. On Saturday, he walked back his comments, saying the “partisan” nature of the overwhelmingly Democratic committee “squandered an opportunity to really thoughtfully examine what took place that day.”

What do these two have in common? Both sidled up to middle-class, conservative voters and then turned their back on their concerns.

So did another figure in the poll: Rep. Liz Cheney, R-Wyo., who is six points underwater—thanks to a huge surge of popularity among anti-Trump Democrats.

Her recent drubbing in the Republican congressional primary by Trump-endorsed Harriet Hageman shows that selling out your base never ends well.

While Manchin and Pence have a higher negative rating than the president, the poll still has plenty of bad news for the 79 year old. His net negative of eight points is the least of his problems.

74 percent of voters think America is on the wrong track. 55 percent disapprove of the job Biden is doing as president—most of them (44 percent) “strongly” oppose his agenda. Most Americans disapprove of the way Biden has handled the economy (56 percent) and foreign policy (53 percent). And 58 percent of respondents said that Joe Biden has so screwed up the country that they believe America’s best days are behind it.

If he bows out of the 2024 presidential race, things look dimmer: Even more Americans dislikes Vice President Kamala Harris. Half of all Americans have a negative view of her, for a net negative score of 18 points.

And more people yet dislike the Democratic Party as an institution.

All in all, Americans did not have a favorable view of a single politician, party, or institution the poll asked about. They  dislike all the preening poseurs on the campaign trail.

It’s almost as if voters believe all American politicians and institutions have sold them out.