Is this the Republican nominee in 2024? - The Horn News 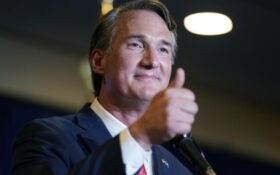 Two kinds of political events are so unbelievable that they create new stars and reset the presidential playing field. The first is when a candidate wins a huge, smashing landslide, like when George W. Bush won a second term as governor of Texas with 69 percent of the vote.

The second comes when a candidate wins—even if he slides in by the skin of his teeth— in a hostile area.

A recent election created a sleeper candidate who may already be running for the office in the land.

Glenn Youngkin won as a Republican running for governor of Virginia last November—and now he’s making moves that mean he might want to run for the White House in a few more months.

Youngkin didn’t exactly win by a landslide: He beat out his opponent, Democrat Terry McAuliffe, by just over one percent of the vote.

But the constant growth of the federal government employees settling in the Virginia suburbs outside D.C. has slowly turned the Old Dominion from a Republican state to a Democratic one. No Republican had been competitive there in years. And MacAuliffe, a well-heeled former governor who’s one of the closest allies of the Clinton family, should have been a shoo-in.

Youngkin won… and since he campaigned against the schools’ poisoning children’s minds with pornographic subjects, he made a stronger showing than expected in the suburbs.

Now, he wants to take his campaign nationwide…and he’s quietly taking all the steps to move from Richmond to the Oval Office.

“Youngkin prepares to wade into national politics,” reported Politico earlier this month—and the details sure make it look like he’s raising his profile.

First, he’s set up two national political organizations to insert himself into races around the country.

He created a political action committee, Spirit of Virginia—which seems to be focused on his state—but then he founded a 501(c)(4) group called America’s Spirit.

And then, people close to him say he’s considering using his organizations to make campaign donations to other candidates around the country…or even holding campaign events, where he visits those states and starts stumping for his fellow Republicans.

That would mean that he might have to, say, give speeches for candidates in states like Iowa, New Hampshire, and South Carolina—the early primary states where 2024 hopefuls are already visiting.

And if the candidates that Youngkin endorses, funds, and campaigns for win their offices, they’re going to be indebted to him: I support you this election, and you support me in the next one.

That’s a standard move when someone wants to run for president.

Youngkin has been stiff-lipped, but his people are quietly hinting there’s something going on beneath the surface.

He’s going to use the Spirit of Virginia to campaign for Republicans, so they can take over both halves of the state legislature.

And he’s definitely going to support other Republican candidates nationally with America’s Spirit.

“It’s great to see Gov. Youngkin take action to support Republicans at the national level. Glenn’s race was a blueprint of how to use common sense policies to win the trust of swing voters, and we need to replicate his win,” said the man in charge of electing Republicans to governors’ offices right now, Nebraska Governor Pete Ricketts.

In a few years, will Youngkin try to “replicate his win” in the Oval Office?

He’s only 55, so he could have a long political life ahead of him. But he has a problem: He can’t run for re-election, because Virginia bans its governors from serving consecutive terms. (He couldn’t run for a second term until 2029.)

“If he waits until 2028 to run for president, in other words, he’ll be old news, having been out of office for three years,” according to HotAir.com.

Lots of candidates are thinking of running for president in 2024, especially if Donald Trump decides not to run somehow.

There are even reports that West Virginia Democrat Joe Manchin might switch parties and run for president in 2024.

Youngkin kept Trump at arm’s length during the 2021 special election: He let Trump campaign for him, but he didn’t make public appearances with him. He won in his own right.

He might want to try his luck as his own man nationally, as candidates start to make definite decisions about running in the next year.

He might even be tempted to run in order to win the vice presidential slot.

Either way, Youngkin knows he could have a very bright future in politics—and he’s doing everything he can to make sure of it.