Mike Huckabee gets cruel with Mitt Romney - The Horn News 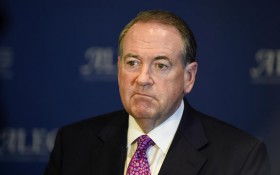 Huckabee slammed Romney after the Utah senator admitted to using a secret social media account under the name “Pierre Delecto.”

Romney’s support for President Donald Trump “bounces back and forth more than a tennis ball at a Venus Williams match,” Huckabee said. “But the latest thing is this incredible revelation that he is, in fact, Pierre Delecto. He’s got a secret twitter account, and I find this really stunning.”

“The man is 72-years-old. Having fake twitter accounts on social media: that’s the work of kids, cowards, couch potatoes, and perverts like Carlos Danger,” Huckabee said.

Carlos Danger was the online alias used by former Rep. Anthony Weiner, before he was convicted over soliciting sex from a minor. Weiner is now a registered sex offender.

“What on Earth is a United States senator [doing] calling himself ‘Pierre Delecto’? If he’s got something to say, man up and say it,” Huckabee said.

“Let us all realize that this guy is not a team player,” he said. “He’s still bitter because Donald Trump got elected and he didn’t.”

Huckabee said the Utah senator needs to “get over” his 2012 presidential election loss and must embrace the United States.

Huckabee said the country is facing a “binary choice” between capitalism and socialism in the next election, and wants Romney to stop attacking Trump and join the fight.

“What a revelation,” the former Arkansas governor said. “I’m embarrassed for him.”

Sarah Huckabee Sanders NEXT job will cause heads to explode!