Sarah Huckabee Sanders NEXT job will cause heads to explode! - The Horn News 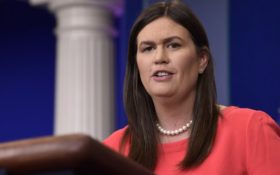 Leftists who think they’re seeing the last of Sarah Huckabee Sanders as she leaves her role as White House press secretary may be in for an ugly reality check.

She’s NOT going away…

In fact, there’s a good chance she’s about to launch her own high-profile political career.

“She is a very special person with extraordinary talents, who has done an incredible job!” President Donald Trump wrote on Twitter as he announced her departure from the White House. “I hope she decides to run for Governor of Arkansas—she would be fantastic.”

And at his presidential campaign kickoff in Orlando, Trump brought her onstage for a round of cheers… and said it again.

“I have a feeling she’s going to be running for a certain gubernatorial position,” he told the roaring crowd.

It’s easy to write that off as Trump simply being kind to a loyal staffer.

But a high-level Arkansas political insider noticed something very curious just a few weeks before it was announced that Sanders would be leaving the administration.

Someone quietly and anonymously registered two websites hinting at a possible run for office.

Lots of speculation in Arkansas today but it is interesting to note that these two websites were registered anonymously on the same day just last month in May. https://t.co/aC7DMBBbiJ and https://t.co/E6wnxHCPAZ #arpx #SarahHuckabeeSanders

Hutchinson, the state’s current governor, is so popular that he won reelection in 2018 with a stunning two-thirds of the vote.

But he can’t run again due to term limits in the state, leaving the race wide open for Sanders, who is “extremely serious” about running, a source told Politico, which reported that she is already in high demand as a speaker in her home state.

“For three and a half years I was focused on serving the President on his campaign and in the White House,” she told the New Yorker. “Now we’ll take some time to reflect, spend time as a family, and decide what’s next.”

But she also told the Associated Press: “I learned a long time ago never to rule anything out.”

Sanders would enter the race with national name recognition and widespread popularity among conservatives, who see her as a Trump loyalist who has stuck with the president through thick and thin.

She is one of the few campaign insiders apart from the president’s family to make it this far into his administration – and one of the few to leave on good terms with the president, who is known to be ruthless with staffers when they don’t meet his high expectations.

That’s important in Arkansas, where Trump is wildly popular

The Trump machine, of course, is the president himself, who would no doubt happily make a few pit stops in Arkansas to support his loyal press secretary.

The Huckabee machine, naturally, refers not only to her own national name recognition but that of her father, who served as the governor himself for more than a decade before becoming a two-time presidential candidate as well as an in-demand presence in conservative media.

And the Boozman machine is that of popular Sen. John Boozman. Sanders managed his successful 2010 campaign, in which he won his first term in the Senate by a 20-point margin.

He’s up again in 2022 – meaning the two could likely campaign together.

But Sanders also has something else in her corner that works in Arkansas like no other state.

She’s the object of anger and derision on everything from the political talk shows on the leftist mainstream media to the late-night comedy shows, which are also dominated by liberals.