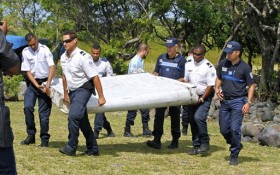 Just weeks after a top French prosecutor said terrorism was being “actively investigated” — and months after a former Malaysian prime minister accused the CIA and world governments of engaging in a massive cover-up — the mystery continues to deepen around the crash of Malaysia Airlines Flight 370.

An Air France pilot Tuesday said that he’d spotted a large object in the waters near Reunion Island, off the coast of Africa, that could very well have been the remains of MH370.

The French pilot is estimated to have been 10,000 feet in the air when he said he spotted the object. At that height, anything spotted would have to be very large. But when search teams were dispatched to the area, they claimed to have found nothing.

It’s the latest suspicious development since the flight disappeared thousands of miles off course on March 8, 2014 with 239 people aboard.

While investigators have tried to play up mechanical failure or even fire as a cause of the flight’s crash, there’s long been speculation that an African-based terror group may have been behind the tragedy and that the link has been kept quiet. And the fact that pieces of the plane continue to wash up off the coast of Africa has continued to feed that theory.

Investigators have been examining the wing part, called a flaperon, since it was flown to a French aeronautical research laboratory near Toulouse last month. And while experts were examining the wing section, French deputy Serge Mackowiak admitted that terrorism was being looked at as a possible cause of the crash.

Until the wing flap washed ashore July 30 on the French island of Reunion, investigators had not found a single physical clue linked to the missing plane, despite a massive air and sea search.