Virginia traffic jam blamed on GOP... only there's one problem - The Horn News 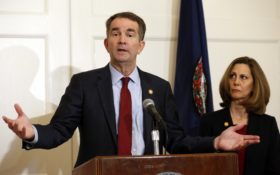 Monday’s snow hit much of the eastern U.S., as far south as Florida. Coastal Virginia’s unusually heavy snowfall created an unprecedented emergency, with some drivers trapped in their cars on Interstate 95 for almost 24 hours.

Drivers have voiced their frustration with the slow, plodding response from the state’s Transportation Department. Some in the media have blamed Glenn Youngkin, the Republican who just won election.

However, there’s one problem.

Youngkin is scheduled to take office on Jan. 15, the last day of Northam’s term. Until then, he is powerless. It was Youngkin’s job to clear the traffic jam, unless he expected Republicans to dig an off-ramp with their bare hands.

Nonetheless, some Democrat-leaning pundits are trying to pin this mess on Youngkin.

Jonah Goldberg, an anti-Trump “conservative,” also joined the chorus. To his credit, he admitted the error and adjusted his argument accordingly.

These tweets came from verified accounts, not bots.

Collateral damage between Glenn Youngkin and the wrath of God.

I deleted the original tweet because even tho I quickly admitted my error, I’m still getting dumb replies from people who don’t know that or don’t care. pic.twitter.com/Eu2W0rTjxd

Some locals criticized national media for projecting presidential politics onto a state-level election. Many Virginians took issue with national pundits’ ignorance of McAuliffe’s controversial record, including his ties to the Clintons.

If Monday’s Twitterstorm about Youngkin is any indication, then maybe out-of-state pundits don’t understand Virginia politics after all.

He was co-chairman of the Clinton 96 campaign! he was a fixture of Virginia politics in an era where it was 7 points further to the right! he's not generic white guy in a suit, he's got the baggage of any ex-Clintonite along with having to awkwardly shift his ideology