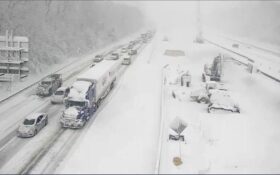 Hundreds of motorists were stranded all night in snow and freezing temperatures along a 50-mile stretch of Interstate 95 after a crash involving six tractor-trailers in Virginia, where authorities were struggling Tuesday to reach them.

Both directions of traffic on I-95 came to a standstill Monday between Ruther Glen, Virginia, in Caroline County and exit 152 in Dumfries, Prince William County, the Virginia Department of Transportation said. At around daybreak on Tuesday, the agency tweeted that “crews will start taking people off at any available interchange to get them.”

Gov. Ralph Northam said his team responded through the night alongside state police, transportation and emergency management officials. “An emergency message is going to all stranded drivers connecting them to support, and the state is working with localities to open warming shelters as needed. While sunlight is expected to help @VaDOT clear the road, all Virginians should continue to avoid 1-95,” he tweeted.

Crews were working to remove stopped trucks, plow snow, de-ice the roadway and guide stranded motorists to the nearest exits along the U.S. East Coast’s main north-south highway, the transportation agency said. By 9 a.m., a single lane of traffic was creeping forward between many stalled trucks and cars in one direction, while people could be seen walking down traffic lanes still covered with ice and snow.

“We know many travelers have been stuck on Interstate 95 in our region for extraordinary periods of time over the past 24 hours, in some cases since Monday morning. This is unprecedented, and we continue to steadily move stopped trucks to make progress toward restoring lanes. In addition to clearing the trucks, we are treating for snow and several inches of ice that has accumulated around them to ensure that when the lanes reopen, motorists can safely proceed to their destination,” said Marcie Parker, the agency’s Fredericksburg District engineer.

The tractor-trailer collision Monday afternoon caused no injuries, but brought traffic to a standstill, and it became impossible to move as the snow accumulated. Hours passed and then night fell, with hundreds of motorists posting increasingly desperate messages on social media about running out of fuel, food, and water.

Between 7 to 11 inches of snow accumulated in the area during Monday’s blizzard, according to the National Weather Service, and state police had warned people to avoid driving unless absolutely necessary, especially as evening and freezing temperatures set in.

Thousands of accidents and stranded vehicles were reported throughout central and northern Virginia. As of 3:30 p.m. Monday, Virginia State Police said troopers had responded to more than 2,000 calls for service due to treacherous road conditions.

Compounding the challenges, traffic cameras went offline as much of central Virginia lost power in the storm, VDOT said. More than 281,000 customers remained without electricity on Tuesday, according to poweroutage.us.

“I’ve never seen anything like it,” Emily Clementson, a truck driver, told NBC Washington. She urged stuck motorists to ask truck drivers if they have food or water to share, since many carry extra supplies in case they get stranded.

The agency tweeted to the stranded drivers on Monday that reinforcements were arriving from other states to help get them moving again.

“We wish we had a timetable, ETA or an educated guess on when travel will resume on I-95. It’s at a standstill in our area with multiple incidents,” the tweet read. “Its frustrating & scary. Please know our crews don’t stop. Crews will work 24/7 until ALL state-maintained roads are safe for travel.”

U.S. Sen. Tim Kaine, who lives in Richmond, tweeted Tuesday morning that he was among those stranded.

“I started my normal 2 hour drive to DC at 1pm yesterday. 19 hours later, I’m still not near the Capitol,” he tweeted, along with a photo showing how his car has been boxed in between three tractor-trailers.

Another stranded motorist was NBC News correspondent Josh Lederman, who spoke on NBC’s “Today” show on Tuesday via video feed from his car, with a dog in the back seat. He said he’d been stuck about 30 miles (48 kilometers) south of Washington, D.C., since 8 p.m. Monday.

“I don’t have any food or water. I have gas, but how long is that going to last?” said Lederman, a former White House reporter for The Associated Press.

All night, it turned out. At around daybreak, VDOT announced that its crews were beginning to try to reach the stranded motorists.

“We started to see a lot of drivers turning their cars off to conserve gas, people running out of food and water, kids and pets holed up for so many hours, people letting their pets out of the car to try to walk them on the street. And in the meantime, no signs of any emergency vehicles that we could see,” Lederman said.

“You really start to think if there was a medical emergency, someone that was out of gas and out of heat — you know it’s 26 degrees and there’s no way that anybody can get to you in this situation.”