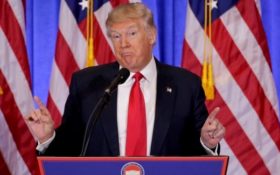 Monday, one of the top trending stories across all social media platforms is on President Donald Trump’s comments on Andrew Jackson and how the seventh president of the United States helped prevent the American Civil War.

“He was really angry that he saw what was happening with regard to the Civil War. He said, ‘There’s no reason for this,'” Trump said of Jackson, much to the delight of social media.

The press is having a field day, gleefully suggesting the president doesn’t know his U.S. history and that Trump was wrong.

All across social media, the story has gone viral. Liberals are quick to point out that Jackson died in 1845, almost 16 years before the first shells were fired on Ft. Sumter, and claim he had nothing to do with the conflict.

There’s only one small hiccup — Trump, you see, was right.

Not just a little right, either.

He was totally, 100 percent right.

Historians credit Jackson with preserving the union during the Nullification Crisis from 1832 to 1833.

Despite what the mainstream media tries to spin, Jackson stopped the Civil War from happening during his presidency — and was outspoken in his regrets that he didn’t do more.

South Carolina, led by former Vice President John C. Calhoun, had threatened to secede from the union over an individual state’s ability to void federal tariffs. The tariffs were put in place by Henry Clay and his political allies in 1832, and they favored the growing industrial north over the slave-dependent exports of the south.

In response to South Carolina’s threats, Jackson threatened to march the U.S. Army into the state and hang any man he deemed treasonous, and Congress approved a bill allowing the president to use force to enforce the law.

At the same time, South Carolina began organizing an army of it’s own, and by 1833 the two sides nearly came to blows.

The controversy was, at it’s heart, the same argument that eventually led to the Civil War. The conflict, Jackson remarked, was far from over… and in May 1833 he accurately predicted the next confrontation.

“The tariff was only a pretext, and disunion and southern Confederacy the real object,” Jackson wrote. “The next pretext will be the negro, or slavery question.”

But don’t expect those subtle differences to be explained by the mainstream media.

CNN might not like it, but Jackson’s strong, military response — and Congress’ eventual compromise that preserved states’ rights — is viewed by historians as a major milestone during the buildup to the Civil War.

Many of these same historians credit Jackson’s actions with ultimately preserving the union.

South Carolina’s military strength relative to the industrial capabilities of the north was higher in the 1830s.

In other words, if the Nullification Crisis had become a full-blown shooting war, it’s uncertain if the Union would have survived.

It was, after all, a close call nearly 30-years later during the Civil War; during those three decades, the industrial north had grown exponentially in strength compared to the southern states. It’s the same industrial power the north used to ultimately win the war.

Jackson was angry about the devolving state of the Union, too.

When Jackson left the White House, he was asked if he any regrets.

“I only have two regrets,” Jackson famously replied. “I didn’t shoot Henry Clay and I didn’t hang John C. Calhoun.”

In other words — Trump was right.

Any history fan can tell you that the Civil War didn’t escalate overnight.

The conflict didn’t exist in a historical bubble, and trying to label it as such — like the liberal media did Monday — is lazy.

— Stephen Dietrich is the Managing Editor of The Horn News. He is a fan of history that regularly speaks out against bad revisionist history.