No, our national anthem ISN'T racist - The Horn News 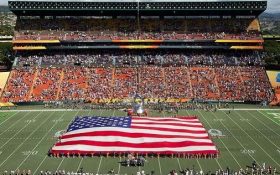 It’s the latest nonsense circling social media. An Intercept article titled, “Colin Kaepernick Is Righter Than You Know: The National Anthem Is a Celebration of Slavery.”

Yes, people are now calling the Star-Spangled Banner a racist song, and are demanding a new national anthem.

Is there any end to this insanity?

Anyone who suggests the Star-Spangled Banner is a racist song is a poor student of history at best, and a liar at worst.

This article is latching on to some key facts but missing the grand picture.

Historically, Key – like America — had a very complicated history on race relations.

“On the one hand, Key widely is believed to have helped spark the Snow race riot of 1835 by his overly aggressive prosecution of a young black man who was accused of trying to kill his mistress,” The Baltimore Sun wrote in an article in July 2014. “On the other hand, it was Key who stood in front of a jail door and faced down the white lynch mob that wanted to skip the trial and hang the suspect, Arthur Bowen, from the nearest tree.”

Key was noted at the time as an effective lawyer, but not as a poet. Only one of his works, the “Defence of Fort M’Henry”, would ever be widely published.

That would later be put to music, and become the Star-Spangled Banner.

This poorly researched article is picking at one line in a poem about the bombardment of Fort McHenry, from the third stanza (traditionally, only the first stanza is sung in the anthem).

No refuge could save the hireling and slave
From the terror of flight or the gloom of the grave,

The author is using it as an indictment on race relations in all of America, claiming this proves Key’s poem was celebrating victory at Ft. McHenry as whites victory over escaped slaves.

The article, though, is being dishonest; it using a gross oversimplification of the very complex history of slavery in America to make dangerous assumptions.

And the author is completely wrong.

To understand meaning of our national anthem, we must know the real history of the Battle of Baltimore.

Critics point out that, starting in April, 1814, an estimated 300 runaway slaves escaped plantations throughout the Chesapeake and joined the British forces over the next year. This detachment was called the Colonial Marines, and it was used against American forces.

However, the unit — one of two made up of escaped slaves that served under British during the war — acted primarily in a support role to the British forces. Remember, the British at the time were their own international slave empire. They used slaves to support their own military and economy. When the British freed their enemies slaves, these “freed” black men were used almost exclusively for demeaning manual labor.

These U.S.-based Colonial Marines never fought in the Battle of Baltimore.

They were not in the Battle of North Point, where British marines marched on the city and were successfully delayed by American forces while the ground defenses around Baltimore were completed.

They were not involved in the bombardment of Fort McHenry, a naval attack the British launched when their ground units were deterred by the American defenses around the city.

How could Key be referencing them in a poem about a battle they were not involved in?

The fact is, we don’t know what Key was referencing in the controversial third stanza.

Some historians think it is a reference to the imprisonment of American naval forces by the British. Leading up to the war, powerful British warships would regularly capture free American sailors (both white AND black) and force them to serve as slaves of the British navy. This aggressive practice was a large reason behind the declaration of war in 1812.

Others think the third stanza could be talking about Colonial Marines, which Key and other Americans likely loathed, and their involvement in the destruction of Washington, D.C.

Still others have wondered if it’s a reference to the treatment of American forces throughout the Revolutionary War.

We do know that history is far more complicated than two lines in a poem about a battle. Consider, for example, that runaway slaves and freed blacks eagerly fought on the American side throughout the war as well — including at the Battle of Baltimore.

So, turn about is fair play. Imagine if we wrote an article that said,

O! thus be it ever, when freemen shall stand
Between their loved homes and the war’s desolation.

Play along with me.

If we act as intellectually dishonest as the people calling the Star-Spangled Banner a racist song, we could argue this point is true.

The British in 1814 had slave owning colonies in the West Indies, and they feared slave revolt as much as slave owning Americans. And the British Empire did not outlaw slavery in their colonies until 1833, after all.

The British were enlisting anyone they could — including foreign mercenaries — as a part of their campaign of destruction against America.

As a result of the destruction the British invasion brought, we know that both freed blacks and slaves alike rushed to the American side at the Battle of Baltimore.

For example, there was William Williams, a runaway slave that escaped bondage in Prince George’s County in 1814. Williams escaped and immediately enlisted as a private in the U.S. Army to defend his country during the British invasion. He joined the 38th U.S. Infantry at Fort McHenry, and was one of the four Americans to die during the British bombardment.

Williams escaped slavery — so he could volunteer to give his life for his country.

George Roberts was an African-American privateer that was celebrated in Baltimore throughout his life for his role in the Battle of Baltimore. “Old George was among those who took up arms in defense of the city of Baltimore in 1814, and throughout his long life was always highly thought of by the citizen soldiery,” The Baltimore Sun wrote in his obituary in January, 1861.

Michael Buzzard joined him in the battle, an African-American that served bravely in the bombardment of Fort McHenry in the U.S. Corps of Artillery.

Charles Ball was an African-American that served in the U.S. Navy in the Chesapeake campaign as Seaman aboard Commodore Joshua Barney’s U.S. Chesapeake Flotilla, and passionately recruited fellow free blacks and runaway slaves to join him against the hated British.

Caesar Wentworth was an African-American that also served in the U.S. Chesapeake Flotilla as the naval forces cook. Gabriel Roulson served as an Ordinary Seaman aboard the U.S. Sloop of War Ontario at Baltimore. Many other skilled free blacks like John Allines and James Ambly and “Fiddler” Jack Murray served as naval mechanics and ship builders in the Baltimore naval yards, building naval ships and privateers.

These black Americans, and countless others whose names have been lost to history, helped build and man the defenses in the city of Baltimore.

A Baltimore merchant noted during the construction of the vital defenses in Baltimore, “They are throwing up trenches all around the city, white and blacks are working together. You’ll see a master and his slave working side-by-side. There is no distinction whatsoever,” according to “The Slaves’ Gamble: Choosing Sides in the War of 1812.”

O! thus be it ever, when freemen shall stand
Between their loved homes and the war’s desolation.

So, is that what the lines are about? Free blacks defending their homes against an invading, international slave empire?

To claim so would be as intellectually dishonest as claiming The Star-Spangled Banner is racist.

Here’s the fact: America is not a perfect nation.

Our history is not perfect, either. Yes, there are sad and shameful moments – one of the worst was the tragic and unjust slave trade.

But there are many, many proud moments, too.

One of those proud moments was the heroic defense of Baltimore against an invading foreign slave empire by patriotic Americans, both white and black.

Saying otherwise is lying, and to argue that is to misuse history to score cheap political points.