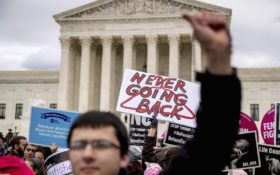 This weekend, hundreds of thousands of women attended a huge political march but the mainstream media didn’t bother to cover it.

The March for Life was attended by over a hundred thousand conservative, pro-life activists in Washington, D.C. — and it was almost entirely ignored.

Instead, the media was busy giving breathless coverage to another political protest: The 2018 Women’s March. In total, the liberal march — which had comparable crowds — was given three times more air time by the mainstream media.

One of those marches was attended by an estimated 500,000 people. The other march boasted hundreds of thousands of men and women that have been coming to march since the start date in 1974.

The major difference between these two marches is that one is full of pro-life advocates and, so, it is rejected by the liberal media.

The March for Life gathers thousands of pro-life Christians to the nation’s capital every January. As the largest annual march in D.C., it mourns abortions and celebrates human life on the anniversary of the Supreme Court 1973 Roe vs. Wade ruling.

Unfortunately, the media does not care about the conservative agenda. They never have.

Last year, the Women’s March took place the day after inauguration day and gathered thousands of angry leftists, who cheered as celebrities told them to blow up the White House. They listened to Islamic terror sympathizers and convicted murderers and celebrated them.

The amount of time devoted to the March for Life?

A whopping 35 whole seconds is all that the mainstream media felt was necessary to discuss the largest pro-life march in D.C.

In 2017, these major networks gave the March for Life less than a third of what the Women’s March received.

Pro-life advocates deserve much more of a voice than those who are rallying against the Trump administration.

The mainstream media has an agenda to stick to and that does not include advocating for the rights of unborn babies.

Do you wish that the liberal media would give more air time to the March for Life? Let your voice be heard here —