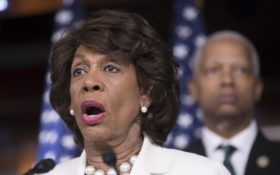 Rep. Maxine Waters, D-Calif., has made a fortune during her long 29-year tenure as California’s 43rd district representative.

Since entering office, Waters has been named America’s “Most Corrupt Politician” at least four times by the left-leaning Citizens for Responsibility and Ethics in Washington.

If U.S. Navy veteran Joe Collins has his way, she’ll never get another chance at the title. Collins wants to unseat Waters in the upcoming election. He told Fox News that Waters had abandoned her community.

“You would think that when you are a Black leader in the Black community, your primary responsibility is to ensure that the people that are in your district have what they need in order to survive during times like COVID-19, but, unfortunately, that has not been the case,” Collins said in a recent appearance on Fox News.

Collins said that during her nearly three decades in Congress, Waters hasn’t helped improve the situation of residents and minority-owned businesses in her district.

“We have tons of black-owned businesses here in Los Angeles that have not been able to receive any type of business. Not from the state, not from the city, not from the federal government,” Collins, who is running as a Republican, said. “The majority of the reason is because of Maxine Waters.”

Collins, a native of South Central Los Angeles, said things are worse in his neighborhood since he returned from the Navy — and he’s amassed a $3.1 million war chest to help his campaign take on Waters.

Jones says Talib’s has agitated constituents, who would call and encourage her to challenge her fellow Michigan Democrat to a rematch of their 2018 battle for the party’s congressional nomination.

“There are things that I might feel, but I just don’t say in public and an example is ‘impeach the M-F’ on the very first day,” said Jones, 60, in reference to the curse-filled rant Talib used during her first public address in 2017. “Not to say you’re going to always agree, but you have to be able to work with those people because you never know who you’re going to need in order to get things done that need to be done.”

The only other member of the squad still facing a primary challenge is Minnesota Rep. Ilhan Omar, whose top challenger on Aug. 11 is a political newcomer who raised millions more than the incumbent congresswoman last quarter. Some of Antone Melton-Meaux’s donations came from pro-Israel groups and conservative donors.

Since being elected, Omar has made statements suggesting members of Congress support Israel because they are paid to do so, but has since apologized.

Race and religion are also factors in Tlaib’s diverse district, where over half of the residents are Black, while the rest are a mix of white, Arab American, Latino and other races. Tlaib, a Palestinian who was born and raised in Detroit, was one of the first two female Muslim members of Congress; Jones is Black. Conyers was also Black and was the longest-serving Black member of Congress, holding office for over five decades.

Ian Conyers, whose grandfather was the former congressman’s brother, said the district was drawn to ensure a voice for Black residents, and he believes it should continue to have a Black representative, particularly following the death of George Floyd in Minneapolis and the elevation of racial justice issues.

Tlaib has a huge financial advantage over Jones, having raised more than $2 million, and she has backing from the political action committee Justice Democrats and other progressive groups.

Jones has brought in about $140,000 but was far outraised in 2018 and lost by only 1 percentage point. The four other candidates are now backing Jones.