Corrupt! Maxine Waters just pulled her most insane stunt yet - The Horn News 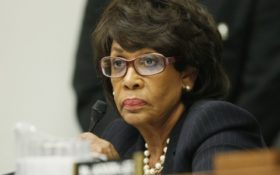 An ethically challenged lawmaker who’s made a name for herself bashing President Donald Trump has just been exposed in an ugly scandal waiting to happen.

Rep. Maxine Waters, a California Democrat, has been using campaign funds to pay her daughter.

Documents reviewed by The Daily Caller show that the daughter, Karen Waters, has been paid more than $42,862 since the start of 2017, with another $65,000 in payments for “professional services” in the pipeline.

Her services are as a “slate mailer,” the website said.

Amazingly, the nearly $100,000 in current and expected payments may be just a drop in the bucket.

FEC filings reviewed last year by The Washington Free Beacon found that Karen Waters and her company, Progressive Connections, have taken in some $650,000 from Citizens for Waters since 2006.

The California congresswoman has become a “resistance” hero thanks to her constant angry anti-Trump rants and impeachment threats. She has attacked just about everything Trump has said and done including – ironically, in light of the new revelations – hiring daughter Ivanka Trump as a White House advisor.

She slammed the president for sending Ivanka to a G20 session last year.

“It does not make good sense. Here you have the president of the United States at the G20, representing us as the leader of the free world, and so he’s going to play politics and give his daughter a chance to have a place in the sun and to be seen at a very important meeting that she knows nothing about,” Waters told MSNBC. “She cannot in any way deal with those members who are there representing those countries. She doesn’t know anything about these issues.”

Waters has been using this kind of anti-Trump rhetoric to united the far left around her. But over the years, she’s performed a more amazing unifying act.

She’s had both leftist and conservative organizations call her out over her complete lack of ethics!

The left-leaning Citizens for Responsibility and Ethics in Washington named Waters one of its most corrupt politicians in 2011, an ugly title she’s received multiple times over the years.

In 2011, the group said she arranged a meeting between officials at the Department of Treasury and OneUnited Bank.

She had financial ties to the bank, which the group called “outrageous” especially given the nation’s economic struggles at the time.

“In the midst of a national financial catastrophe, Rep. Maxine Waters (D-CA) used her position as a senior member of Congress and member of the House Financial Services Committee to prevail upon Treasury officials to meet with OneUnited Bank,” CREW said in a news release at the time. “She never disclosed that her husband held stock in the bank.”

The National Legal and Policy Center, a conservative watchdog group, is likewise stunned by her newfound fame.

“When ethics groups of all political leanings agree that a particular member of Congress does not have the minimal ethics needed for the position, it is strange that that member parades as an advocate of ethics,” Ken Boehm, chairman of the organization, told The Daily Beast last year. “That describes the current odd posturing of Maxine Waters.”

Odd is one word for it.