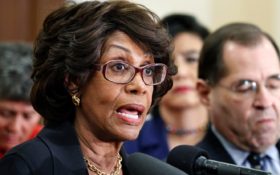 California Rep. Maxine Waters lives a life of luxury that very few Americans can afford — and she’s not ready to give it up.

Government shutdown or no, Waters has continued  to collect her paycheck and live the high-life on the taxpayer dime.

In fact, one picture captured on Monday shows the liberal lawmaker at her very worst — and it’s quickly going viral.

HEY LOOK – It’s Maxine Waters sitting in First Class on my flight to DC during the government shutdown.

This is the only photo I could snap since she’s in the first row & I’m literally in the last row.

Sitting next to Waters is an opened envelope… containing what eagle-eyed social media observers say is her latest paycheck from her California state pension program (CalPERS).

CalPers Cashin’ them checks! She gets $6200 month pension from CA. pic.twitter.com/36iWVMmRvI

Waters can easily afford such luxurious accommodations, of course.

On a $174,000 annual salary during her thirteen-terms in office, Waters has (somehow) managed to collect a massive, multi-million dollar fortune. She owns a huge mansion in one of the richest areas in California — and her fortune has grown so large, even genius Wall Street investors are scratching their heads.

How can she afford to live so high on the hog while everyday employees are struggling to get by?

Corruption, say critics. And it’s not just her political opponents pointing out the hypocrisy.

Is there any image more fitting for Democratic lawmakers? While thousands are out of work and the common voters are stuffed in steerage, they’re sitting up front in first class reading friendly stories about themselves in the mainstream media.

In the midst of the longest-ever government shutdown… despite holding approximately 800,000 federal employee’s paychecks hostage… Waters clearly isn’t ready to give up the good life.

Corrupt! Maxine Waters just pulled her most insane stunt yet