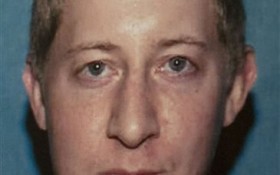 A fugitive wanted by Idaho authorities for wounding a church pastor apparently wrote a manifesto contending that Martians controlled the Earth, police said.

Kyle Odom, 30, was arrested at about 5:30 p.m., Tuesday by U.S. Secret Service agents after allegedly throwing items over the fence at the White House.

“I think everyone can breathe a good sigh of relief that at least this part of the case has come to a conclusion,” Coeur d’Alene Police Chief Lee White said.

Meanwhile, Pastor Tim Remington, shot six times Sunday outside his church in Coeur d’Alene, about 30 miles east of Spokane, has regained consciousness and is talking with his family.

Coeur d’Alene Police Detective Jared Reneau said Odom had attended Remington’s church a few times and apparently was the author of a manifesto that contended the pastor was a member of a Martian species that had taken over the Earth. Details were contained in electronic documents that Odom apparently mailed to his family and news media outlets this week.

White said he was told Odom threw computer flash drives and other unidentified items over the White House fence. Hazardous materials and bomb teams were working to identify the other items, he said.

The Secret Service will get first crack at prosecuting Odom for any crimes that might have been committed at the White House, Reneau said. Then the Kootenai County prosecutor will seek Odom’s extradition to Idaho to face charges in Remington’s shooting, he said.

Odom’s family issued a statement Tuesday evening, saying they were thankful for the safe apprehension of their son.

“As Kyle was not living with us, we are learning of his plans as they are being released by police,” Odom’s family said. “We are truly thankful to God he is safe and no one else has been injured.”

After the Sunday afternoon shooting, Odom drove west toward Spokane, Washington. Odom boarded a flight at the Boise Airport sometime Monday, White said. It’s unclear how Odom was able to board a plane with a warrant out for his arrest, White said.

A former Marine from Coeur d’Alene, Odom is suspected of shooting Remington a day after the pastor led the prayer at a campaign rally for Republican presidential candidate Ted Cruz. Authorities say there’s no indication Remington’s appearance with Cruz had anything to do with the shooting.

Odom graduated from the University of Idaho with a degree in biochemistry. The manifesto contended that his life started to deteriorate during his final semester and was now ruined.

“Ruined by an intelligent species of amphibian-humanoid from Mars,” the manifesto said.

Odom contended that the Martians were here before humans, lived underground and operated a breeding program for humans, the manifesto said.

“Don’t believe me? Ask President Obama to take a lie detector test of this one,” the manifesto said.

Odom contended the Martians were unable to control his mind but had been following him. He said he had attempted suicide twice, but they stopped him.

The manifesto included the names of members of Congress, members of the Israeli government, Remington and John Padula, outreach pastor for The Altar Church, where Remington is the senior pastor.

“It was extensive and it was disturbing to us,” White said.

“He’s whispering and talking to his family a little bit,” Padula said.

Remington, who is married and has four children, has no feeling in his right arm, Padula said.

Remington has been with The Altar Church for nearly two decades, specializing in the treatment of drug and alcohol addiction, Padula said.

The Coeur d’Alene Police Department issued a warrant of attempted first-degree murder for Odom, who has no criminal record but does have a history of mental illness.

Police said Odom drove to the Spokane area on Interstate 90 after the Sunday afternoon shooting, according traffic camera footage. He then turned south before they lost his trail. Odom’s car was found in Boise, White said.