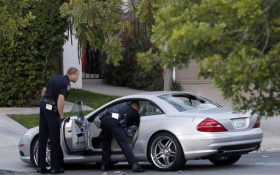 A jury on Wednesday convicted a house painter of premeditated attempted murder for the shooting of a San Diego TV sports anchor last year.

Jurors deliberated for about four hours before finding Mike Montana, 55, guilty of shooting Kyle Kraska and of two counts of making criminal threats to people unrelated to the shooting. He could get about from about 38 years to life in prison at his sentencing next month.

Kraska, the sports director and on-air anchor for CBS News 8 in San Diego, gave emotional testimony of being shot and nearly killed in his driveway in February 2015. He was shot four times, including twice in the chest.

Kraska had hired Montana to paint the house the previous October, but he said Montana quit before the job was halfway done.

Montana later demanded payment and about a week before the shooting left a note under Kraska’s doormat that read, “It’s in your best interest to pay the money that you owe me,” Kraska testified.

Montana’s attorney says he was not trying to kill Kraska, only to shoot his car. The lawyer also argued that Montana’s mental state was altered by prescription pain medications.