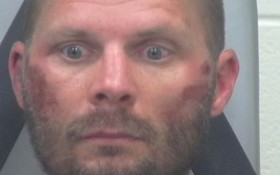 An Army veteran is accused of killing his mother at their Florida Panhandle home on Mother’s Day and hitting a deputy’s cruiser with an iron rod.

Santa Rosa County Sheriff’s deputies were called to the home Sunday morning and heard yelling and the sounds of someone in distress, The Pensacola News Journal reported.

A bloodied 38-year-old Christopher Reed Lynch approached deputies, wielding an iron rod with a hook on the end, a police report said. He became violent and hit a deputy’s cruiser with the rod. The deputy used a stun gun, but Lynch was still trying to punch and kick deputies after repeated shots from the stun gun. Lynch was eventually placed in leg irons and handcuffs.

Deputies found Cheryl Lynch on a blood-covered porch. She told deputies her son hit her but said she couldn’t remember what happened. Her eyelids were swollen shut and she had multiple cuts on her face. She was taken to the hospital where she died.

The newspaper reported that Lynch suffered a traumatic brain injury on July 13, 2000, while on training exercises with the Army in France. He returned home and his mother was his caregiver.

In 2009, Cheryl Lynch wrote a letter to the House Committee on Veteran’s Affairs, describing his condition.

“If something were to happen to me, who will know enough about my son’s individual difficulties and medical needs to continue to manage his care? … Who would be able to put the proper supports in place for my son not to end up on the streets, institutionalized, or even worse?”

It’s not known what caused the confrontation early Sunday.

Lynch remains in jail on an open homicide charge, along with charges of aggravated battery, assault on an officer and resisting an officer with violence.

Records don’t say whether a lawyer is representing him yet.