Major change coming to US passports? - The Horn News 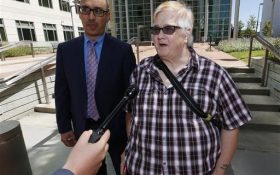 A Navy veteran from Colorado who does not identify as male or female is pushing the U.S. government to allow for a third gender option or get rid of gender designators altogether on passports, highlighting the argument that forms on the state and federal level have been slow to include other identities even as gender becomes less defined.

A federal judge considering a legal challenge brought by Dana Zzyym (pronounced Zimm) urged the State Department on Wednesday to settle the case in a way that allows Zzyym to get a passport without having to lie about being a man or a woman. Zzyym, who was born with ambiguous sexual characteristics, was raised as a boy and later identified as intersex.

Arli Christian, state policy counsel for the National Center for Transgender Equality, said she does not know of any statewide forms that provide a box to be marked other than male or female, but some states allow other gender options on an individual basis.

“It happens unofficially with some amount of frequency,” said Christian, who questioned why gender should even be included on forms like driver’s licenses and passports.

“In terms of the assertion of non-binary identity, it has gotten a lot more attention recently, and legally speaking, the policies are catching up,” she said. “For the most accurate identification document, there should be a non-binary option.”

On Wednesday, U.S. District Judge R. Brooke Jackson seemed to agree, hinting that he would force the State Department to allow Zzyym to get a passport without having to choose from the male or female options.

“A lot of things are changing in our world,” said Jackson, who seemed exasperated at times with the government’s defense.

U.S. Attorney Ryan Parker argued that moving beyond two gender choices would upend the State Department’s ability to verify identities and backgrounds largely because of the agency’s reliance on state driver’s licenses and birth certificates.

Christian, who was not at the hearing, called that argument “nonsensical.”

She said the State Department and individual states have their own policies for marking gender, and they have no bearing on each other.

“The idea that the gender marker on the passport is in any way tied to the state document is untrue,” she said.

A handful of countries, including Australia and New Zealand, allow people to put an “X” for their gender on passports and they are allowed to travel into the United States with them.

Since 2010, the State Department has allowed transgender people to change the gender designation on their passport from male to female or vice versa with a doctor’s certification but has stopped short of providing other gender options. Parker told Jackson on Wednesday that none of the 57 states and territories that issue driver’s licenses allow for a third gender option, but Zzyym’s lawyers expect to see that change.

In Oregon last month, a state judge allowed Jamie Shupe to be legally classified as a non-binary person, rather than male or female — a decision believed to be the first of its kind. Shupe’s lawyer, Lake Parraguey, said the state is working on allowing Shupe to get a driver’s license with that designation. Parraguey said many states have similar, simple processes to change people’s gender identities, similar to a name changes, and orders like Shupe’s will eventually have to be honored by other states.

The Colorado case comes amid controversy over North Carolina’s law requiring transgender people to use restrooms in many public buildings that are consistent with the sex on their birth certificate — and as several conservative-led states are suing President Barack Obama’s administration over its directive to public schools to let transgender students use bathrooms that match their gender identity.

Zzyym’s experience shows how murky the issue is.

The gender on Zzyym’s birth certificate originally was left blank although the document was later amended to say unknown. Zzyym, who lives in Fort Collins, served in the U.S. Navy as a man before identifying as intersex while working and studying at Colorado State University.