Did Melania Trump’s speech writer set her up? - The Horn News 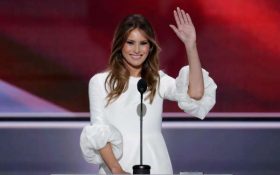 It’s enough to give the gossip columnists and late night chuckle-heads a field day, for sure.

And although the apparently lifted passage was of very little consequence, the video evidence is hard to deny.

But while the mainstream media and political talking heads are gloating over the misstep, there’s another issue that deserves serious attention.

It’s no secret that journalists, like a pack of hungry wolves, look for lifted passages in convention speeches. In fact, Michelle Obama herself was criticized after her 2008 speech for allegedly plagiarizing a passage from Chapter 2 Saul Alinsky’s book, “Rules for Radicals.” (And, for the record, President Barack Obama has been accused of plagiarism, too.)

And, unfortunately, the shenanigans don’t stop there.

During one part of her speech, Mrs. Trump seems to have unintentionally “Rickrolled” the audience — a popular Internet prank that involves surprising an unsuspecting audience with lyrics from the 1980’s pop-song “Never Gonna Give You Up”.

It’s something young Americans are very familiar with — but something a Slovenian-born, non-native English speaker is probably unaware of. And you can be certain it wasn’t her idea.

The speech included an almost verbatim quote from a verse of the song, likely no coincidence.

But to reiterate (and to paraphrase @tvoti), the real speechwriter's scandal here is this ACTUAL RICKROLL?!?!?!?!?! pic.twitter.com/eSuFbbVs43

Mrs. Trump is not a politician, she is a jewelry and watch designer. English is not her first language, Slovene is. And she has never spoken in front of an audience this large.

So, like most of us would, she relied — at least partially — on the help of professional speech writers.

Either intentionally — or with extreme recklessness and incompetence — those writers let her down.

But news that is worthy of the front page of every mainstream media outlet?

There are much, much bigger stories than a non-English speaker being tricked into unknowing public humiliation. Media outlets busy gloating today are acting less like adults, and more like mean girls at a Middle School dance.

Grow up. There are far more important things to talk about.

Below is Mrs. Melania Trump’s full speech. Take a look, then let us know your thoughts — Is it possible Melania Trump was set up? Or is she guilty of plagiarism?