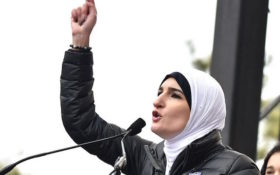 January’s “Women’s March” in Washington, D.C. was a disastrous affair. Thousands of angry liberals gathered in our nation’s capitol to protest President Donald Trump after the election — but they got more than they bargained for.

Turns out, the speakers that liberals had chosen had a disgusting history. Radical Islamic terrorists around the world were seen cheering when leaders pushed the oppressive ‘hijab’ on American women.

One of the march’s leftist leaders was busted having been previously convicted for the brutal rape and torture of a stranger.

March leaders were caught meeting with a convicted Islamic terrorist just days after the march. They were also busted rallying communist leadership and murderers to form the core of the anti-Trump “resistance.”

The crowd left huge piles of garbage, which was left to be cleaned up by embarrassed Trump supporters that were in town for the Inauguration.

Now, the Muslim woman representing Islam at the march, Linda Sarsour, is taking it to the next level.

She is calling on liberals to join in a “jihad” — a Muslim holy war — against the Trump administration.

” … I hope that we, when we stand up to those who oppress our communities, that Allah accepts us from us that as a form of jihad!” Sarsour said at the 54th annual Islamic Society of North America (ISNA) meeting last weekend. “That we are struggling against tyrants and rulers, not only abroad in the Middle East or on the other side of the world, but here, in these United States of America, where you have fascists and white supremacists and Islamophobes reigning in the White House.”

The crowd cheered and clapped in response, which concluded that liberals must never stop expressing their anger and outrage while Trump is president.

According to Breitbart, “New York Assemblyman Dov Hikind, a Democrat who has often criticized Sarsour in the past, warned in a statement Thursday that Sarsour’s words should be taken ‘very seriously’: ‘Words matter. Attacks on the police, like the one New York suffered yesterday, are precipitated by violent slogans. Sarsour is very dangerous.'”

It’s time for liberals to listen to the actual words their speakers are spoon-feeding them, instead of cheering mindlessly.

If you can stomach it, a video of Sarsour’s speech is below —