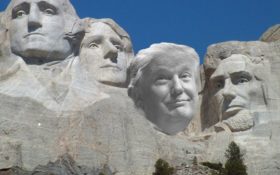 On Wednesday, President Donald Trump announced his official plans for America’s birthday — and the spectacle is taking place at one of the country’s most patriotic sites.

Fireworks are returning to Mt. Rushmore, and right on cue liberals are upset about it.

Trump made the announcement amid successfully signing his historic U.S.-China trade deal — which The Horn News discussed Wednesday.

“I called up our people and in 15 minutes got it approved and we will have the first fireworks display at Mount Rushmore, and I will try and get out there if I can,” he said.

The fireworks celebration had been canceled since 2009, due to wildlife concerns and some experts noting a pine beetle infestation of the Black Hills National Forest nearby Mt. Rushmore according to CNN reporting.

These beetles, studies showed, made the trees more flammable and therefore hazardous for fireworks.

But South Dakota State News, in a press release announcing the Fourth of July fireworks last year, claimed that Black Hills National Forest has since gained strength and that technology advancements in fireworks have made it safer.

Yet and still, liberals are mad about the celebration of America.

I just heard that Dumbfuck McClownStick is trying to ruin the 4th of July for me.

If Trump is at Mount Rushmore this 4th of July, I will be in Custer (who doesn't seem like such a bad guy compared to Trump), watching THOSE fireworks.

Or better yet I'll be at home playing ESO.

It wouldn’t be Trump Derangement Syndrome without someone insulting his intelligence!

Trump opens his mouth, once again, only to reveal how clueless he truly is.

Claims there will be fireworks at Mount Rushmore this 4th of July.
There’s no fire hazard there cuz it’s nothing but a “bunch of rocks.”

Sounds like the perfect metaphor for the inside of his head. https://t.co/avaQ1Os42h pic.twitter.com/EgsZ1Ie84Y

WAIT. I know there's A LOT going on right now but can we talk about Trump's plans to set off fireworks at Mt Rushmore on the 4th of July??? Does this asshole want to start a giant forest fire because he's jealous of Australia being in the news right now? https://t.co/OlONvKOmsO

But the planned move was also celebrated by public officials.

South Dakota Gov. Kristi Noem, who announced the Mt. Rushmore move in May 2019 said, “We are excited and honored to see fireworks return to our nation’s Shrine of Democracy.

“When the fireworks were previously held at Mount Rushmore, the show was beamed around the globe via satellite. The entire world was able to view a celebration of our nation’s freedoms from the majestic memorial and the beautiful Black Hills of South Dakota.

“There is no more fitting place in all the nation to celebrate our democracy than from Mount Rushmore. We are grateful to President Trump and Interior Secretary Bernhardt for helping us make this happen.”