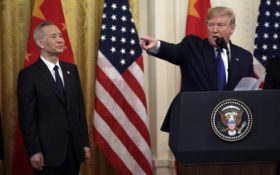 Democrats are doing everything within their power to sell the impeachment for President Donald Trump to voters.

But behind the scenes, the White House just quietly got a major win for America.

Trump spent Wednesday hard at work, and his latest victory is pretty evident of one thing: He’s keeping his promise to American voters.

The mainstream media is doing everything it can to silence the news.

Trump signed a historic trade deal with China — which many pundits are confirming as an important first step in protecting American interests for years to come.

But one money expert is saying a clever political move that Trump announced in summer 2019 is responsible for the groundbreaking pact between the two nations.

CNBC’s Jim Kramer pointed to Trump’s harsh tariffs on Chinese goods — which taxed billions of dollars on imported goods from the Asian giant — as what led to the big foreign policy win Wednesday.

“I keep wondering when people are going to recognize that it is historic that tariffs did succeed,” Cramer said.

“Tariffs were not supposed to work,” he continued, noting that at the time Trump announced the tariffs in 2019, the mainstream media crushed him for it…

“The Chinese were supposed to be able to get around them,” the “Mad Money” host added. “It didn’t happen.”

And as a result, the Trump administration has kicked off 2020 with a win that will positively echo for years to come, undoing the years of liberal politicians going soft on China.

“Together we are righting the wrongs of the past,” Trump announced at the White House ceremony to celebrate.

“Our efforts have yielded a transformative deal that will bring benefits to both countries,″ he continued. ”Keeping these two giant and powerful nations together in harmony is so important for the world.”

“The world is watching today.”

The agreement signed Wednesday morning is seen as a “phase one” and is expected to be just one installment of many more trade deals between the U.S. and China.

Most importantly, the pact saw China agree to better police its companies for stealing American technology. Tech theft is something Chinese entities have become infamous for according to Bloomberg.

In addition, China is also expected to spend $200 billion worth of American goods, including beef, pork, and poultry.

However, the U.S. is still going to move forward with a %25 percent tariff on $250 billion worth of Chinese goods, likely in an attempt to monitor and ensure that China holds up on its end of the bargain.

According to CNBC, Treasury Secretary Steve Mnuchin says that the existing tariffs could be lifted if both nations reach “phase two” of the agreement.