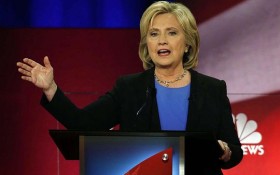 Former secretary of state and current Democratic front-runner Hillary Clinton has always had an uncomfortable relationship with the truth. And at last night’s Democratic Party debate, critics say Clinton was caught telling three whoppers — including one sure to anger black voters she is working diligently to court.

Though Clinton has been feverishly working to lock up the minority vote she lost so badly to President Barack Obama in 2008, she may have stirred anger by implying that many black males are criminals.

During last night’s debate, Clinton speculated that black men have a 1-in-3 chance of being incarcerated, which isn’t even close to true. In fact, Clinton’s estimate actually doubles the rate at which black men go to prison.

Previous government reports had found that 16.6 percent of adult black males had actually ever gone to prison, or 1 in 6.

And the incarceration rates have actually declined since those reports were issued.

When it comes to racial issues, Clinton — who was recently criticized for pandering to Latinos through a series of ads comparing herself to their grandmothers — keeps putting her foot in her mouth.

Clinton was eager to gain favor with the anti-gun crowd, and attacked Democratic rival Bernie Sanders for his stance on guns.

Clinton complained that, “He voted against the Brady Bill five times,” as well as for allowing guns in national parks and for shielding the gun industry from lawsuits.

But Sanders is no friend of the Second Amendment, and his opposition to the Brady Bill and other gun-control measures had nothing to do with protecting gun owners, as Clinton well knows.

Some days she seems to distance herself from the Obama administration. But last night, Clinton was eager to cozy up to its health care law.

Speaking about Obamacare, Clinton said, “We now have driven costs down to the lowest they’ve been in 50 years.”

But that’s not even close to true. Health care spending is far higher than a half century ago.

Even if she was talking about year-over-year growth in health care spending, Clinton still isn’t close to right.

The government reported in December that health care spending in 2014 grew at the fastest pace since Obama took office, driven by expanded coverage under his law and rising drug prices. Not only that, but health care spending grew faster than the economy as a whole, reaching 17.5 percent of GDP. That means health care was claiming a growing share of national resources.