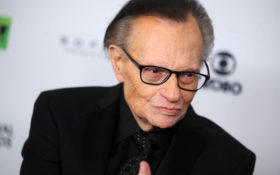 CNN may be the Cable News Network, but it replaced journalism with spouting off about President Donald Trump years ago – according to the most legendary host in CNN history.

The man whose face was synonymous with cable TV’s first 24-hour news network summed up its modern coverage in one devastating sentence.

“CNN stopped doing news a long time ago,” said Larry King, who spent two and a half decades as a host.

Now, instead of news, “they do Trump.”

King knows a thing or two about CNN. He hosted its longest-running show, “Larry King Tonight,” for 25 years.

When CNN viewers tuned in at 9 o’clock on weeknights, from 1985 until 2010, they’d see King slouching over his desk, wearing his trademark suspenders, talking with everybody from celebrities to presidents and prime ministers.

He said major news stories don’t get a minute of CNN’s time today – that wouldn’t advance the media elites’ agenda of bashing the president.

“You don’t see a story — there was vicious winds and storms in the Northeast the other day,” King said, “not covered.”

CNN even had a role in creating Trump, King said during an interview last week on the Russia-run TV network, RT America.

“When CNN started covering Trump — they were the first — they covered every speech he made, and then they made Trump the story,” he said on the network, where he hosts “Larry King Now.”

“They carried every speech he made. They carried him more than Fox News, at the beginning,” King continued.

“They covered him as a character,” King told Rick Sanchez, another former CNN personality.

The network might have built Trump up, thinking he would be the easiest Republican candidate to beat – but it backfired spectacularly.

“Trump is the story in America” – and the only story, King complained.

King hosted 6,120 episodes of his signature show while with CNN – and he made news. Ross Perot announced he was running for president on King’s program.

But that was years ago. Today, the network just trashes Trump, 24/7.

Since 2016, the hosts have filled every minute of their low-rated broadcast day with hateful stories, rumors, and innuendos about the president and the first family.

But CNN has aired the most ridiculous stories – like whether the president got an extra scoop of ice cream at dinner, how drinking Diet Coke might affect his health, and whether he overfed fish during a visit to Japan. Any story with an anti-Trump angle got air time.

That didn’t exactly pull in the viewers either.

Spending 100% of its time smearing a president supported by at least half of all Americans has caused CNN’s ratings to plunge. In October, the network had less prime timer viewers than USA, the Hallmark Channel, or HGTV.

CNN anchor Jim Acosta decided to create some fireworks by turning every encounter with the president into a personal confrontation… CNN vs. Donald Trump, mano a mano!

But after the midterm election, Trump had finally had enough of Acosta’s grandstanding and “rude” behavior.

When Acosta refused to let other reporters get in a question – and put his hands on a young, female White House intern to keep a death-grip on the mic – the White House pulled his credentials.

Now, the network that Trump calls “fake news” is suing the president to have Acosta’s White House press pass reinstated.

CNN might try putting King back on the air – his show attracted a million viewers a night, even long after the Fox News boom. Or at least, his old network should try listening to him and airing some real news once in awhile.