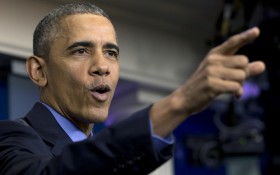 Entering the last year of his second term, the lame-duck President Barack Obama may finally be showing his stripes on illegal immigration.

And many Republicans have decried Obama’s policies as “back-door amnesty.”

The White House formally disclosed this week that in the 2015 budget year, the U.S. deported the fewest amount of illegal immigrants in all of Obama’s presidency.

The Homeland Security Department oversaw the deportation of about 235,000 people between October 2014 and September 2015, the lowest total in eight years.

There are an estimated 11 million immigrants living in America illegally.

The DHS has also formally reported a large decline in arrests at the border. Border arrests dropped about 30 percent from 2014 to 2015.

The overall total of deportations generally does not include Mexicans caught at the border and quickly returned home by the U.S. Border Patrol.

With a presidential election coming, it has long been speculated that Obama would adopt a more passive attitude toward illegal immigration. Permissive immigration policies are considered important to wooing Latino voters, who will play a major role in deciding the outcome of the 2016 contest.

Previous polling from the Pew Research Center has also found that illegal immigrants are four times more likely to identify with the Democratic party, as opposed to the GOP.