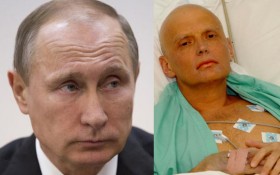 It’s a plot straight from a Bond thriller. Except this time, a British judge says it’s probably real.

Owen, who led a public inquiry into the 2006 killing of Alexander Litvinenko, said he was certain that two Russian men had given Litvinenko tea containing a fatal dose of radioactive polonium-210 during a meeting at a London hotel in November 2006.

He said there was a “strong probability” that Russia’s FSB, successor to the Soviet Union’s KGB spy agency, directed the killing and that the operation was “probably approved” by Putin, then as now the president of Russia.

On his deathbed, Litvinenko accused Putin of ordering his killing, but this is the first public official statement linking the Russian president to the crime.

The statement sent a chilling jolt through U.K.-Russia relations. Britain summoned the Russian ambassador for a dressing-down Thursday and imposed an asset freeze on the two main Russian suspects: Andrei Lugovoi, now a Russian lawmaker, and Dmitry Kovtun.

Litvinenko, a former FSB agent, fled to Britain in 2000 and became a vocal critic of Russia’s security service and of Putin, whom he accused of links to organized crime.

Owen said Litvinenko “was regarded as having betrayed the FSB” with his actions, and said “there were powerful motives for organizations and individuals within the Russian state to take action against Mr. Litvinenko, including killing him.”

Marina Litvinenko, the spy’s widow, said outside the court that she was “very pleased that the words my husband spoke on his deathbed when he accused Mr. Putin have been proved by an English court.”

She also called for tougher action, urging British Prime Minister David Cameron to expel Russian intelligence agents operating in Britain and impose economic sanctions and travel bans on Putin and other officials linked to what her lawyer, Ben Emmerson, called “a mini-act of nuclear terrorism on the streets of London.”

“It’s unthinkable that the prime minister would do nothing in the face of the damning findings,” Marina Litvinenko told reporters.

British Home Secretary Theresa May said the involvement of the Russian state was “a blatant and unacceptable breach of the most fundamental tenets of international law and civilized behavior” — but not a surprise. She announced asset freezes against suspects Lugovoi and Kovtun and said Interpol had issued notices calling for their arrest if they traveled abroad. Russia refuses to extradite the two men.

Lugovoi is now a member of the Russian parliament, which means he is immune from prosecution in his country.

U.K.-Russian relations have remained chilly since the killing of Litvinenko, who was granted British citizenship shortly before his death.

The British government in 2014 appointed Owen to head a public inquiry into the slaying. He heard from dozens of witnesses during months of public hearings last year and also saw secret British intelligence evidence.

Announcing his findings at London’s Royal Courts of Justice, Owen said “there can be no doubt that Alexander Litvinenko was poisoned by Mr. Lugovoi and Mr. Kovtun” in the Pine Bar of London’s luxury Millennium Hotel on Nov. 1, 2006. He died a grisly death three weeks later.

In his 326-page report, Owen said based on the evidence he had seen, the operation to kill Litvinenko was “probably” approved by then-FSB head Nikolai Patrushev, now head of Putin’s security council, and by Putin.

The judge laid out the overwhelming scientific evidence against Lugovoi and Kovtun, including a trail of radiation that stretched from the hotel teapot to the sink in Kovtun’s room and even the Emirates stadium, where Lugovoi attended a soccer game.

He said the case for Russian state involvement was circumstantial but strong. Owen said Litvinenko had “personally targeted President Putin himself with highly personal public criticism,” allied himself with Putin’s opponents and was believed to be working for British intelligence.

Litvinenko had said he was working for British intelligence, though British authorities have never confirmed it.

Owen said the method of killing, with radioactive poison, fit with the deaths of several other opponents of Putin and his government, and noted that Putin had “supported and protected” Lugovoi since the killing, even awarding him a medal for services to the nation.

While there was no direct proof, Owen said it was “likely” the FSB chief would have sought Putin’s approval for an operation to kill Litvinenko.