Justice! Clinton to FINALLY be indicted? - The Horn News 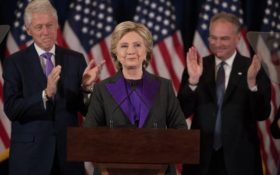 Former Democratic presidential candidate Hillary Clinton isn’t heading to the White House in January — instead, she could be heading to the big house.

The election didn’t halt the numerous criminal investigations into the Clintons; they remain ongoing… and opponents are adding another congressional investigation to that list as well.

“You have people with security clearances that obviously violated those, and they have not been disciplined in any way, shape, or form that I can tell at the State Department,” Chaffetz said Tuesday. “Of course we’re going to look at that. We’d be remiss to just dismiss it.”

“It wasn’t political targeting at the beginning, so because there’s been a political election why should I just drop it?”

“This is the largest breach of security, perhaps, in the history of the State Department,” Chaffetz also told Fox News Sunday.

Beyond the congressional investigation, there remains an open investigation internally at the State Department, as well as the ongoing investigation by the FBI into the alleged Clinton Foundation’s “pay-to-play” kickback scheme while Hillary served as secretary of state.

The Horn News reported in early November that federal investigators have been eager to indict the Clintons for months, and during the election the FBI began calling itself “Trumpland.” There were widespread reports of FBI investigators furiously fighting against President Barack Obama’s Department of Justice to get an indictment before Nov. 8, which they failed to do.

It’s possible these career investigators may put their recommendation for indictment on hold, knowing that a friendly administration is just around the corner.

President-elect Donald Trump promised that, if he were president, Hillary would be in prison.

If critics of the former secretary of state have their way, that promise may finally come true soon.