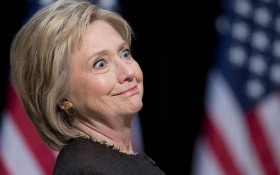 Comey submitted a controversial letter to Congress on Sunday, signaling that the FBI was finished with their investigation into Clinton’s irresponsible homebrew email server. But as frustrating as the decision is for Clinton opponents, the FBI might have a surprise still in store for the Clintons.

The FBI isn’t done investigating – not by a long shot. And it could mean jail time.

“The FBI has an intensive investigation ongoing into the Clinton Foundation,” Tom Fuentes, a former assistant director at the FBI, said in early October, citing current and former senior FBI officials as sources.

What’s taking so long? Perhaps the sheer volume of dirty deeds that need to be investigated.

Holding back the investigation could be strategic, too. It has been widely reported that federal investigators are chomping at the bit to indict the Clintons, and according to Fox News the FBI is calling itself “Trumpland” and agents are furiously fighting against President Barack Obama’s Department of Justice to get an indictment.

Knowing an unfriendly DoJ awaits investigators, a delay in a recommendation for Clinton’s prosecution may be explained as a strategic move by savvy legal minds.

Should Trump win the election Tuesday and is able to replace Attorney General Loretta Lynch with a more friendly and eager prosecutor in January, it could help prevent the rigged system from destroying months of FBI research.

Alternatively, they could be holding up the case until their investigation is completely airtight, so that not even Obama’s cronies can deny the facts.

Either way, the fact is that FBI agents across the country are still hot on the Clinton’s tail. Even if she wins Tuesday, there’s no guarantee she’ll even get a change to show up in the Oval Office in January.

Clinton could be the first president impeached on Inauguration Day.