Fourth of July fireworks are cancelled - The Horn News 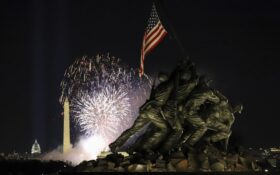 If you’re a patriotic American, your favorite national holiday is just around the corner.

Independence Day reminds us of everything that’s great with America—the parades, the anthems, and the fireworks that remind us of the wars our veterans fought to keep us free.

Last year, even in the middle of anti-American riots and a global coronavirus outbreak, then-President Donald Trump lifted the country’s spirits by having the biggest patriotic bash in years by setting off a flashing display over Mount Rushmore.

Standing next to him was South Dakota’s up-and-coming governor, Kristi Noem.

Now that the coronavirus is fading into the past, she wants to celebrate with another patriotic blast of fireworks over the monument to American heroes like no other… but President Joe Biden doesn’t want anything to do with it.

With the vaccine that Donald Trump authorized widely available, Gov. Noem announced the fireworks were coming back stronger than ever in 2021.

But in March, the Biden administration stopped it cold.

Joe Biden’s National Park Service turned down her request to hold the bash—and got one of his handpicked judges to back him up.

The NPS said a big outdoor gathering like this had too many “potential risks” to “allow a safe and responsible fireworks display to be held at this site.”

“In addition, the park’s many tribal partners expressly oppose fireworks at the Memorial,” the NPS said.

Gov. Noem took Biden to court, but unfortunately the case came up in front of a judge appointed by the Obama-Biden administration, who died with his old boss.

Judge Roberto A. Lange ruled that Biden had the right to shut things down, although he did say that the government would probably have to explain why it allowed a huge public event last year, at the height of the COVID-19 virus, and not this year.

“I am disappointed that the court gave cover to this unlawful action with today’s decision,” Gov. Noem responded.

And she promised to keep fighting for the chance to celebrate the United States on the day it was founded.

“Rest assured, this fight is not over,” the governor said. “I will appeal so that the Fireworks Celebration can return to Mount Rushmore and we will once again celebrate our nation’s birthday at America’s Shrine to Democracy for next year and in the future.”

Biden warned this might be coming back in March.

Back then he promised that if the American people were good, wore their masks, and took the vaccination his administration kept rolling out, he’d give them just a little, tiny taste of freedom.

“Here’s the point,” he said. “If we do all this, if we do our part, we do this together, by July the 4th, there’s a good chance you, your families and friends will be able to get together in your backyard or in your neighborhood and have a cookout and a barbecue and celebrate Independence Day.”

And he did say, “That doesn’t mean large events with lots of people together.”

And if you’re not good and obedient, he might even cancel that.

“July 4th with your loved ones is the goal,” he said. “But a lot can happen.”

“The fight isn’t over,” Gov. Noem said. “This is part of the radical Left’s agenda. They don’t want to celebrate America or our freedoms. They’re pushing critical race theory. They’re pushing the 1619 Project. And this is just another one of those battles to erase our true, honest, and patriotic history in this country.”

If there’s one thing the faces on Mt. Rushmore should teach Biden, Obama, and their crony judges around the country: True American patriots don’t surrender until their freedom is won.