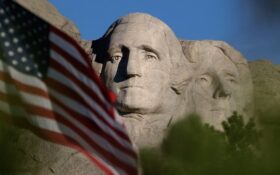 President Donald Trump’s next big stop on the campaign “comeback” will take him to Mount Rushmore on Independence Day.

Amid civil unrest and a relentless coronavirus gripping the country, the President will celebrate the Fourth of July in front of four of America’s greatest leaders.

The event is slated to include fighter jets thundering over the 79-year-old stone monument in South Dakota’s Black Hills and the first fireworks display at the site since 2009.

The move is considered a statement by many pundits amid protesters and rioters tearing down American statues.

Trump will be celebrating the country in front of four “statues” that can’t be torn apart.

Trump has long shown a fascination with Mount Rushmore. South Dakota Gov. Kristi Noem said in 2018 that he had once told her straight-faced it was his dream to have his face carved into the monument. He later joked at a campaign rally about getting enshrined alongside George Washington, Thomas Jefferson, Teddy Roosevelt and Abraham Lincoln. And while it was Noem, a Republican, who pushed for a return of the fireworks on the eve of Independence Day, Trump joined the effort and committed to visiting South Dakota for the celebration.

The four faces, carved into the mountain with dynamite and drills, are known as the “shrine to democracy.” The presidents were chosen by sculptor Gutzon Borglum for their leadership during four phases of American development: Washington led the birth of the nation; Jefferson sparked its westward expansion; Lincoln preserved the union and emancipated slaves; Roosevelt championed industrial innovation.

The monument was conceived in the 1920s as a tourist draw for the new fad in vacationing called the road trip. South Dakota historian Doane Robinson recruited Borglum, one of the preeminent sculptors at the time, to abandon his work creating the Stone Mountain Confederate Memorial in Georgia, which was to feature Robert E. Lee, Jefferson Davis and Stonewall Jackson.

Borglum was a member of the Ku Klux Klan, according to Mount Rushmore historian and writer Tom Griffith. Borglum joined the Klan to raise money for the Confederate memorial, and Griffith argues his allegiance was more practical than ideological. He left that project and instead spent years in South Dakota completing Mount Rushmore.

And of course Trump’s move is not without controversy, as minority groups voice their concerns over what they say is an ugly mark on history.

Many Native American activists say the Rushmore memorial is as reprehensible as the many Confederate monuments being toppled around the nation.

“Mount Rushmore is a symbol of white supremacy, of structural racism that’s still alive and well in society today,” said Nick Tilsen, a member of the Oglala Lakota tribe and the president of a local activist organization called NDN Collective. “It’s an injustice to actively steal Indigenous people’s land then carve the white faces of the conquerors who committed genocide.”

While some activists, like Tilsen, want to see the monument removed altogether and the Black Hills returned to the Lakota, others have called for a share in the economic benefits from the region and the tourists it attracts.

The monument often starts conversations on the paradox of American democracy — that a republic that promoted the ideals of freedom, determination and innovation also enslaved people and drove others from their land, he said.

“If we’re having this discussion today about what American democracy is, Mount Rushmore is really serving its purpose because that conversation goes on there,” he said. “Is it fragile? Is it permanent? Is it cracking somewhat?”

Quanah Brightman, who now runs United Native Americans, said the activism in the 1970s grew out of the civil rights movement of the 1960s. He hopes a similar movement for Native Americans comes from the Black Lives Matter movement.

“What people find here is the story of America — it’s multidimensional, it’s complex,” Griffith said. “It’s important to understand it was people just trying to do right as best they knew it then.”