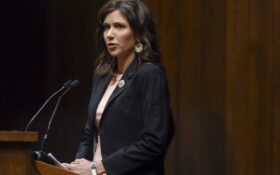 The 2020 presidential election still remains highly contested, but political insiders are already talking about 2024 — and there’s a huge shake-up coming.

Joe Biden’s performance so far makes nobody believe he’s going to survive to 2024.

But there’s a good chance that even if the Republican Party nominates former President Donald Trump, former Vice President Mike Pence won’t be on the ticket.

Trump insiders say the fallout between the two men has become so bitter that Trump plans to ditch Pence — and they’ve named the two leading candidates to replace him.

Three Trump insiders said that Trump is seriously weighing replacing Pence with a woman or a person of color.

And Trump’s team said the two people most likely to end up on the Trump 2024 ticket are South Dakota Gov. Kristi Noem and Sen. Tim Scott of South Carolina.

Noem has been a close Trump confidant since being elected governor in 2018. She once gave Trump a replica of Mount Rushmore with his face cut into it.

Trump’s Fourth of July Speech at Mt. Rushmore made the pair so tight that Gov. Noem made an unannounced flight into Washington to meet with Pence to calm the then-vice president’s fears over losing his job.

“She never stated it directly, but the vice president found her message clear: She was not after his job,” the New York Times reported.

But Noem’s become a major star among conservative Republicans for her refusal to close the state during the COVID-19 pandemic. Noem also finished third in the annual CPAC convention straw poll — second if Trump doesn’t run for president in 2024, behind Florida Gov. Ron DeSantis.

Plus, President Trump may have given us a hint about their future relationship: His entire team, including his own family, has invested deeply in keeping Noem a GOP rising star.

Last Friday, Donald Trump Jr. and his girlfriend, Kimberly Guilfoyle threw a funraiser for Noem at Mar-a-Lago. And a second Noem fundraiser has been scheduled by longtime Trump adviser Corey Lewandowki.

Noem doesn’t really need the money; South Dakota is as red a state as you can get.

So, why all the fundraising?

A big war chest can help Noem raise her profile and have enough money left over to give on to other candidates — making them beholden to her in a way they wouldn’t be to with Donald Trump.

But what about Sen. Tim Scott, the Senate’s only black Republican? Trump’s actions there have politicos wondering if he’s setting up a future partnership. Trump gave Scott “my complete and total endorsement”… two weeks ago.

But Scott isn’t up for reelection for 20 months — almost two full years away.

So, why endorse now?

More interestingly, Trump praised the South Carolina senator for following what sounds like a MAGA party line: Scott is “strong on the military, law enforcement, loves our vets, protects our Second Amendment and our borders,” Trump said.

Scott also got into a viral shouting match this week with CNN’s Don Lemon when he said, “Woke supremacy is as bad as white supremacy,” another Trump campaign theme. Is he auditioning for VP?

Scott has already said his next election is his final race — for the Senate. “I plan to run for re-election but that will be my last one if I run,” Scott told reporters in August 2019.

Scott also ruled out running for governor in the same interview with South Carolina’s Post and Courier newspapers.

But what about vice president?

Trump often clashed over priorities with Pence, a more traditional conservative. Does Trump think Scott would be a better fit?

The two have butted heads in the past over Trump’s rhetoric, and Scott helped take down two of Trump’s nominees. Unlike Noem, Scott said on January 5 that Trump’s hopes of being re-elected were hopeless.

And Scott may also have his eye on the White House in his own right. He would already have an enormous advantage in his home state of South Carolina, and he’s made numerous trips to Iowa and New Hampshire.

Of the two, Noem would seem the more natural fit. But when Trump ran for president in 2016, he conducted an elaborate game of appearing with Pence and former House Speaker Newt Gingrich as potential running mates. Noem and Scott may be the 2024 version of the same game.

Polls continue to show that, if he runs, Donald Trump would be the frontrunner for the 2024 Republican presidential nomination. But his second-in-command? That slot may be wide open.