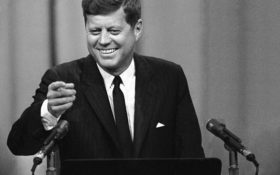 Now seven days away, Biden is facing frustrations over his slow pace… and stirring doubts about whether he’ll keep his promise.

In 1992, former President George H. W. Bush signed the JFK Assassination Records Act, a law requiring the National Archives to disclose all the records within 25 years.

Only the president can postpone the release of these records, under the 1992 law. In 2017, former President Donald Trump released many-to-most of the records, but he extended the deadline for the rest.

“Accordingly, by the authority vested in me as President by the Constitution and the laws of the United States of America, including section 5(g)(2)(D) of the Act, I hereby certify that all information within records that agencies have proposed for continued postponement under section 5(g)(2)(D) shall be withheld from full public disclosure until December 15, 2022,” Biden wrote in a memo last year.

Since delaying the records, Biden has faced accusations of enabling the conspiracy theorists.

Biden delayed the deadline amid the federal bureaucracies’ disagreements over which records to release, Politico reported after a Freedom of Information Act request.

“Newly released internal correspondence from the National Archives and Records Administration reveals that, behind the scenes, there has been a fierce bureaucratic war over the documents in recent years, pitting the Archives against the CIA, FBI and other agencies that want to keep them secret,” Politico reported, describing an internal conflict stretching five years into the past.

“The correspondence, obtained under the Freedom of Information Act, shows that the Archives has tried, and often failed, to insist that other agencies comply with the 1992 law by declassifying more documents.”

The CIA and FBI reportedly said in these letters that they want to protect the still-living people named in those documents.

Meanwhile, the Defense Department has lobbied the Archives to conceal the records due to concerns over “sensitive nuclear weapons information” unrelated to the assassination, Politico reported.

In other words, Biden may delay the records again, given the infighting among the bureaucracies.

More 15,000 records remain classified, The Daily Mail reported. The others are publicly available.