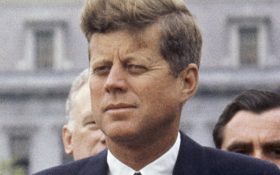 According to the documents, the assassin Lee Harvey Oswald visited a Soviet embassy before killing President John F. Kennedy, and he asked one official about getting a Soviet passport.

However, some transparency advocates are less shocked by this revelation than by President Joe Biden’s slow pace on this issue.

Under the law, the president may withhold these records after 2017 only if he finds a security risk outweighing the need for transparency.

Former President Trump released many-to-most of these records in October 2017. He pushed the hard headline to April 2018, in order to give national security officers more time to review them for any “identifiable harm.”

Trump tweeted in 2017, “JFK Files are being carefully released. In the end there will be great transparency. It is my hope to get just about everything to public!”

Trump released some additional records in 2018, and then postponed the final deadline once more to October 2021, due to security concerns.

Now, Biden has doubled down on this piecemeal approach. He postponed the October deadline. In an October memo, he blamed pandemic delays.

In the memo, Biden  created two new deadlines. He mentioned an “interim release” on Dec. 15 and a “more comprehensive release in late 2022.”

Then, on Dec. 15, Biden disappointed the public again. Many of the new released records appear to be duplicates of old records, with the old redactions filled in.

Some Americans want to see more. Larry Schapf, an environmental lawyer and transparency advocate, intends to sue the Biden administration.

In a Tuesday email to CNN reporters, he wrote, “We will be seeking a court order instructing the President to release the remaining records or to disclose the specific identifiable harm posed by each document sought to be postponed and how such alleged harm outweighs the strong public interest in the release of these records — which were supposed to have been released by October 26, 2017.”

Former CIA officer David Pries said that a CIA source from 1963 could still be alive… and at risk.

“It could be that there’s a source out there who is still in power or still connected directly to someone that would be dangerous for today’s intelligence collection,” Priess told CNN. “Now, you have to balance that against the historical interest and the compelling public interest here.”

Some advocates have abandoned all hope of ever seeing the remaining records.

“I think it’s possible we’ll just never see some of these documents,” Phil Shenon, a former reporter for The New York Times, told CNN in 2018.

The newly released records can be viewed on the National Archives website as PDF files.

At this rate, it may take reporters several months to read them all. By then, Biden will likely have released more of them… but not all of them.