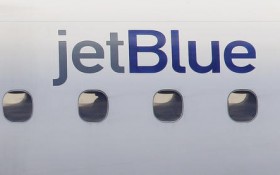 JetBlue Airways is taking applications for 24 slots in a new program to train novice pilots to fly a passenger jet.

The airline said Monday that the program — the first of its kind at a large U.S. airline — will cost about $125,000 and take four years to complete. Graduates could wind up flying 100-seat passenger jets.

Applicants will be judged with tests measuring hand-eye coordination, multitasking, critical thinking and other skills. Those who survive the first cut will be interviewed.

JetBlue expects the first group of six prospects to begin training in late summer at the airline’s training center in Florida. JetBlue hired CAE, a maker of flight simulators, to provide the training. CAE has run similar programs for EasyJet and Ryanair in Europe and several airlines in Asia.

Christie believes the program will open the profession to more people. The trainees will meet all federal requirements before carrying passengers, he said.

“They will absolutely be as qualified as any other pilot that is operating a JetBlue aircraft,” he said.

Taking a page from programs in Europe, the students will start training with other crew members in a cockpit or simulator much earlier than usual, according to JetBlue and CAE. Currently, some new U.S. pilots learn by dusting crops or toting advertising banners — experience that may bear little resemblance to working in an airliner cockpit.

The applicants will pay for their own training, and the cost is not much different from the amount that many aspiring pilots now spend to accumulate the 1,500 flight hours necessary for an airline pilot’s license.

Christie said the students will be able to defray some of their costs by earning a salary as a CAE instructor for part of their training period. CAE described the salary as “competitive” without providing specifics.

Nick Leontidis, president of CAE’s training business, said students who struggle will be flagged for remedial training and, failing that, expulsion. But washout rates in similar programs at other airlines have been “extremely low,” he said.

“We believe this is going to be an important part of how airlines are going to create pilots in the future,” Leontidis said.

The pilots’ union at JetBlue pilots opposes the plan. Jim Bigham, chairman of the union’s council, said JetBlue should instead hire pilots with experience at regional airlines who currently get passed over.

Bigham said he is not against training newcomers to the field, “but when they come out, I want them to go gain some real-world airline experience prior to becoming an apprentice at JetBlue.”