At Jeff Sessions vote, one powerful message stole the spotlight - The Horn News 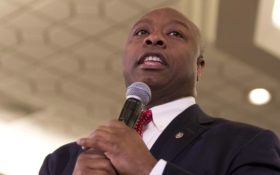 Despite nasty attacks against Alabama Sen. Jeff Sessions, the Senate confirmed him as the attorney general under President Donald Trump.

But it was South Carolina Sen. Tim Scott’s message of inclusion that stole the show, because it destroyed the Democratic opposition’s race baiting attacks against the Alabama Republican.

You can watch it below in the following two videos —

.@SenatorTimScott: "When I leave the U.S. Senate one day I'm still going to be black." Watch LIVE on C-SPAN2 https://t.co/N9qPdAy0Rf pic.twitter.com/PkUxjekpmU

.@SenatorTimScott reads tweets criticizing his endorsement of Sen. Jeff Sessions: "I left out all the ones that use the n-word." pic.twitter.com/AhTnGaUyiz

The 52-47 nearly party-line vote capped weeks of divisive battles over Sessions, an early supporter of President Donald Trump and one of the Senate’s most conservative lawmakers. After the vote was announced, Sessions’ Republican colleagues applauded the outcome while barely a handful of Democrats did the same.

In a post-vote valedictory speech, Sessions alluded to the bitter partisanship and wished for more collegiality.

“Denigrating people who disagree with us, I think, is not a healthy trend for our body,” he said.

Since Trump tapped Sessions, Democrats have laced into the lawmaker, casting him as too cozy with Trump and too harsh on immigrants.

Republicans say Sessions has demonstrated over a long career in public service — and two decades in the Senate — that he possesses integrity and honesty and is committed to justice.

“He’s honest. He’s fair. He’s been a friend to many of us, on both sides of the aisle,” Majority Leader Mitch McConnell said. “It’s been tough to watch all this good man has been put through in recent weeks. This is a well-qualified colleague with a deep reverence for the law. He believes strongly in the equal application of it to everyone.”

Sessions won unanimous backing from Senate Republicans and also picked up the support of one Democrat, Joe Manchin of West Virginia.

Wednesday’s vote came amid rising tension between Republicans controlling the chamber over delaying tactics by minority Democratic that have left fewer of Trump’s picks in place than President Barack Obama had eight years ago. Democrats no longer have filibuster power over Cabinet picks, however, after changing Senate rules when they controlled the chamber in 2013.