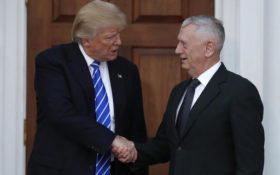 The president’s cabinet of 15 individuals was established in the Constitution to advise the President on any information relating to each member’s office. Now that President Trump has been officially sworn in, we’re taking a look back at the individuals he personally chose to advise him for the next four years, and who’s been confirmed so far.

Pence will serve as Trump’s right-hand man throughout his presidency. The previous Governor of Indiana was the first Cabinet nomination Trump made, and assisted him in nominating the remaining 14 members of the Cabinet.

Department of the Treasury — Steve Mnuchin

Former partner of Goldman Sachs and hedge fund manager, Mnuchin’s nomination is a promotion from his previous position as the finance chairman of Trump’s presidential campaign. During his Senate hearing, he promised to raise the U.S. debt ceiling, lower taxes for businesses and workers, and “get the engine of economic growth firing on all cylinders once again.”

One of Trump’s most popular cabinet picks is James ‘Mad Dog’ Mattis. The retired Marine general was actually pushed into early retirement by Former President Barack Obama, reportedly due to the fact that he asked too many, common-sense questions regarding foreign policy with Iran. Conservatives and Democrats alike have praised this Cabinet pick.

Senator Sessions was one of the first members of Congress to endorse Trump back in February, and has remained loyal ever since. He chaired Trump’s national security advisory committee, and was a major point of advice for Trump when choosing his vice president. Trump’s transition team commented on Sessions record, saying Trump, “has been unbelievably impressed with Senator Sessions and his phenomenal record as Alabama’s attorney general and a U.S. attorney.”

The Former Georgia governor was Trump’s final Cabinet pick. Perdue is the son of a farmer, turned veterinarian, turned governor, and clearly wears many hats. Trump and Perdue reportedly spoke about agriculture and trade, specifically about, “ways to ensure American producers are not placed at a disadvantage in international agreements.”

Ross is an investor and banker who specializes in recovering failed businesses in steel, coal, telecommunications, foreign investment and textiles. He will be one of the richest people to ever hold public office, with a net worth of $2.9 billion. He proved his dedication to the post when he divested a major collection of assets in order to avoid conflict of interest issues.

Puzder is the CEO of CKE Restaurants, the parent company of Carl’s Jr. and Hardee’s. He is a known critic of minimum wage, and often argues that excessive government regulation of businesses destroys jobs, similar to Trump. His confirmation hearing scheduled for February 2nd.

A Physician and Georgia Representative, Tom Price is a known critic of Obamacare. Trump referred to Price as, “exceptionally qualified to shepherd our commitment to repeal and replace Obamacare and bring affordable and accessible health care to every American.” As the top health official, it’ll be Price’s responsibility to dismantle the Affordable Care Act, something that Trump promised to tackle during his first days in office.

The former Trump opponent jumped on the make America great again bandwagon once his own presidential nomination became a failure. The soft-spoken, former neurosurgeon proved during his Senate hearing that he understands middle-class Americans, citing his own personal experiences. Carson has insisted that providing for individuals instead of teaching them how to earn what they need themselves is what fueling the growing lower class in our nation.

Elaine Chao is the first Taiwanese-American to be appointed to a president’s cabinet. She has announced that she plans to utilize private investors for the American transportation system. President Trump has announced that he plans to invest in the United States infrastructure, and Chao concurs with his proposals.

Former Texas governor Rick Perry has been a focus of the mainstream media after the New York Times falsely reported that he didn’t understand the position for which he was being nominated. After saying he wanted to be an advocate for energy, the Times published an article titled, “Learning Curve’ as Rick Perry Pursues a Job He Initially Misunderstood.” The former transition official, Michael McKenna came to his defense, telling The Daily Caller that he was misinterpreted and “of course” he understands the role he is about to take on. He went on to acknowledge Perry would say, “I’m serious about the challenges facing the nuclear complex.”

Betsy DeVos is an American businesswoman, philanthropist, and education activist. Her confirmation hearing is complete, and a vote has been scheduled for Jan. 24. She has expressed passion for improving opportunities for low-income children, supporting public schools, and ensuring a safe environment for children.

Former Marine of 42 years, Kelly was praised by Democrats and Republicans at his confirmation hearing for his military service. As Secretary of Homeland Security, Kelly will oversee the Coast Guard, Customs and Border Protection, Immigration and Customs Enforcement, the Secret Service, and the Federal Emergency Management Agency.