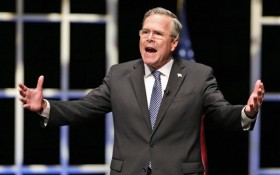 But now his campaign is scrambling to explain why Bush has repeatedly fabricated a story about receiving a major award from the National Rifle Association.

Bush, who is pro-gun, has told a story during numerous stump speeches about being handed a ceremonial rifle by Charlton Heston after being named the NRA’s Statesman of the Year in 2003.

It’s a story Bush has relied on often to curry favor among gun-owning voters. But there are just two problems with Bush’s version of events –Heston never gave Bush a rifle, and he was never named NRA’s Statesman of the Year.

In fact, the NRA gives out no such award.

An investigation first conducted by BuzzFeed learned that Bush was indeed a keynote speaker at an NRA convention in 2003 and was given a rifle as a thank-you from NRA President Kayne Robinson. But he received no other award and it’s not clear whether Heston, who was suffering from health issues and left the convention early, even heard Bush speak.

Bush’s campaign is trying to walk back the claims that their candidate has made many times, arguing that he “was mistaken and conflated multiple events unintentionally.”

Now it’ll be Bush’s challenge to explain to voters the difference between conflating and lying.