Islamic State to slaughter hundreds of Christians - The Horn News 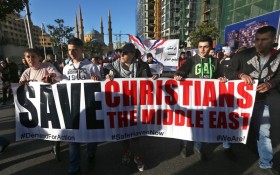 Hundreds of Christians are set to be put to the sword by the mad terror organization ISIS.

According to a report from the Christian Post, the group took more than 230 hostages in February, of which 180 Assyrian Christians still remain in their hands. ISIS is demanding their church leaders pay millions in ransom, or the Christians will be executed.

The Assyrian church leaders have desperately pleaded for international assistance, saying they don’t have enough to pay the terror organization to deliver their members back unharmed.

Hope began to grow for their safe return in September, when ISIS’ began lowering their demands.

But the blood-thirsty terrorists used the weekend to send a chilling message to the churches – time is running out. ISIS posted a brutal video online of three prisoners being executed, and have demanded payment of $12 million for the release of the remaining 180 in their possession.

“We plea and beg of the international community to intervene immediately,” wrote A Demand for Action spokesperson Diana Yaqco, a watchdog organization in the region.

“They are helpless. They are children. They are women. They are somebody’s father and brother,” Yaqco said, adding “We have been driven out of our ancestral lands. We have been killed and crucified. The international community must act now to save lives of others kidnapped.”