ISIS warning: “The USA is next” - The Horn News 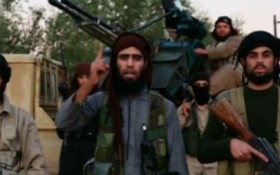 In a disturbing new video, members of the Islamic State sent a dire threat to the United States that the group is plotting a Paris-style attack on our nation’s capital… and soon.

Previously, ISIS has claimed as many as 71 agents are already embedded in the United States, and since that time nearly 2,000 Syrian migrants have been settled around the country. One of the terrorists behind the recent Paris attacks had reportedly posed as a Syrian migrant and security experts are warning there may be others.

“We say to the states that take part in the crusader campaign that, by God, you will have a day, God willing, like France’s and by God, as we struck France in the center of its abode in Paris, then we swear that we will strike America at its center in Washington,” an ISIS leader identified as Al Ghareeb the Algerian said in the video.

Current and former American officials say last week’s attacks in Paris show the extent to which the ISIS aspires to hit Western soft targets, including in the United States.

“I certainly would not consider it a one-off event,” CIA Director John Brennan said Monday. “It is clear to me that ISIL (another acronym for ISIS) has an external agenda, that they are determined to carry out these types of attacks … it’s not just Europe. I think we here in the United States also have to be obviously quite vigilant.”

The United States is still “vulnerable to an attack like what happened in Paris,” despite our prior preparations said Matthew Olsen, the former head of the National Counterterrosim Center. “You can’t totally eliminate the risk. It’s just not that hard for a handful of very committed individuals to gain the capability and the means to carry out an attack like that, and it’s very hard to defend those locations.”

French officials say the Paris attack was carried out by disaffected French Muslims and Syrian migrants under the supervision of a radical Islamist who had fought in Syria. The coordinated violence raised immediate questions about why the plot went undetected and whether law enforcement and intelligence agencies have necessary surveillance capabilities. Investigators will also try to establish whether the plotters communicated using encryption or some other technique to avoid surveillance.

“I think we are at a substantial risk for a domestic event,” Townsend said. “While I have every confidence in our law enforcement and intelligence services, they don’t really have the tools and the resources they need against the size of the problem.”

FBI Director James Comey is also concerned. He has said that ISIS poses a graver threat than al Qaeda ever did, and that the bureau had open investigations regarding this threat in all 50 states — 900 such investigations overall.

After the Paris attacks, the FBI directed its field offices to be on heightened alert and to remain extra vigilant in tracking suspected terrorists. An internal situation report dated Sunday and obtained by The Associated Press shows that the FBI was tracking social media accounts traced to, and travel by, people the document says have links to extremists.

The FBI has made dozens of arrests in the last year of Islamic State sympathizers in the United States. Federal officials say that some 250 Americans have attempted to or succeeded in traveling. Some made it there successfully.

Comey said the rate of Americans’ travel attempts to join ISIS varies from six to nine per month.

Federal law enforcement officials have repeatedly expressed concern about the spontaneous and unpredictable nature of the Islamic State’s external plotting. The group encourages its followers who cannot travel to Syria to kill wherever they are.

“You have hundreds of people in this country who have become inspired by the ideology of ISIS and we’ve already seen examples where individuals are willing to commit acts of violence in furtherance of that ideology,” said John Cohen, a former Department of Homeland Security counterterrorism coordinator now at Rutgers University.