ISIS animals executing their own mothers? - The Horn News 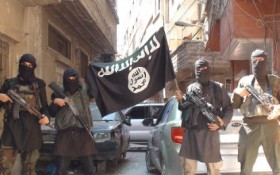 Just when you thought the fighters supporting the brutal terror group ISIS couldn’t get any sicker or more evil, a disturbing new report has emerged from Syria.

A Syrian human rights group has confirmed that an ISIS member yesterday personally executed his own mother in front of hundreds of supportive onlookers.

According to the Syrian Observatory for Human Rights, a woman in her 40s who works at a post office in Raqqah was hauled into the street and killed by her own son.

The woman reportedly was accused of “inciting her son to leave the Islamic state and escaping together,” and her son turned her in to ISIS authorities.

ISIS allowed the young man to carry out its death sentence personally.

The incident follows several other reports of ISIS fighters killing or turning in their own family members. And in October, ISIS released a video from its Saudi members threatening to murder their families back home if they did not “repent.”