Is this sheriff the most dangerous man in America? - The Horn News 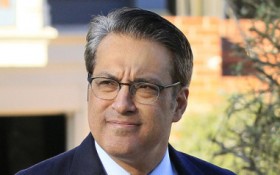 San Francisco Sheriff Ross Mirkarimi may be the most dangerous man in America. He’s a convicted criminal that refuses to enforce federal law on immigration, and it is costing American lives.

On Tuesday, Homeland Security Secretary Jeh Johnson publicly vented his anger at Mirkarimi and others for their policy against cooperating with immigration officials, and called his stance “unacceptable”.

Mirkarimi, a liberal Democrat that helped found the Green Party in California, has previously been charged with a number of crimes, including domestic battery, child endangerment, and dissuading a witness.  The mayor of San Fransisco called for his resignation in 2011, which Mirkarimi refused to tender.

The city’s sanctuary policy has come under scrutiny since the killing of Kate Steinle as she walked with her father and a family friend along the San Francisco waterfront in July.

The shooting triggered a national debate over immigration after it was revealed the man charged in the killing, Juan Francisco Lopez-Sanchez, was out on the streets after Mirkarimi refused a request from federal immigrations authorities to keep him locked up.

“It is counterproductive to public safety to have this level of resistance to working with our immigration enforcement personnel,” he said during a talk at The Commonwealth Club in downtown San Francisco.

He added, “It is simply in my judgment not acceptable to have no policy of cooperation with immigration enforcement. We’re all interested in getting criminals off the streets.”

San Francisco’s sanctuary law does not prohibit local law enforcement from informing U.S. Immigration and Customs Enforcement that they’ve arrested someone in the country illegally for a felony offense or detained a person with prior felony convictions.

Still, Mirkarimi reckless policy remains picking and choosing when he wants to cooperate. And illegals know they have a safe and protected home in his city.