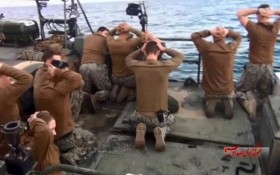 Iran’s capture of 10 U.S. sailors in the Persian Gulf, just days before implementation of Obama’s nuclear deal with the Islamic Republic, caused outrage around the world for it’s provocative nature. And now, the Iranian supreme leader has taken it a step too far, say critics.

On Sunday, Irans supreme leader Ayatollah Ali Khamenei publicly celebrated the Islamic Republic’s so-called victory over the United States by awarding Fath medals to the four Iranian naval commanders in charge of the assault and capture, as well as the commander of the Iranian navy.

Iran had awarded the Fath, or “victory,” medal only 210 times in it’s history. It is considered one of the highest awards the Islamic Republican has for its military.

The Ayatollah used the award ceremony as an opportunity to warn that Iran will remain on guard against its enemy, the United States, despite the recent nuclear deal reached with Obama that has seen more than $100 billion worth of previously frozen Iranian assets be freed.

The U.S. sailors were kidnapped while traveling in small, modestly armed vessels known as command boats, headed from Kuwait to Bahrain, which is the location of the U.S. Navy’s 5th Fleet.

The boats were boarded and the sailors seized by Iran and escorted at gunpoint to Farsi Island, which is in the middle of the Gulf and home to an Iranian military facility, after the boats drifted off course.