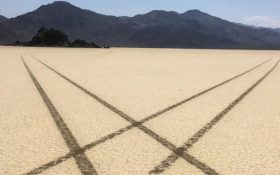 Federal investigators have identified a person of interest as they hunt a driver who took an illegal joyride on a fragile, dry lake bed in Death Valley National Park, leaving 10 miles of swerving tire tracks.

The damage was done about six weeks ago. Park spokeswoman Linda Slater said Tuesday that a witness to the off-road drive notified authorities. Park rangers are investigating.

Motor vehicles are banned from the site known as Playa Racetrack, where visitors can see how wind and ice push rocks that leave lengthy trails in the lake bed.

The tracks are shallow but broke the crust of the lake bed.

Slater says there has been discussion about how to reduce the damage but only a rare rain that covers the lake bed will erase the tracks.