Insane plan to protect the Pope - from Congress!? - The Horn News 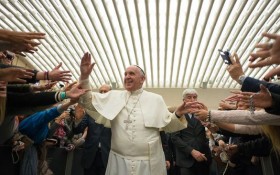 Federal security officials seem especially worried about one event on Pope Francis’ visit to America – his planned speech before Congress.

Leaders from both parties are concerned that the pontiff will be mobbed by publicity-seeking members of Congress looking for photo-ops or to appear on television with Francis.

They’ve had to carefully instruct Congressional members that no handshakes, photos, or kissing of the rings are allowed when Francis enters the House chamber for his historic speech to Congress.

Even more pathetic, House and Senate leaders are planning on building a wall of inner-circle veterans they trust to block the pope from glad-handers desperate to reach him.

These same House and Senate leaders also sent a reminder message this week to fellow lawmakers, asking they refrain “from handshakes and conversations along and down the center aisle during the announced arrivals of the Senate, dean of the Diplomatic Corps, U.S. Supreme Court, president’s Cabinet and Pope Francis.”

The pope is scheduled to arrive at the Capitol shortly after 9 a.m. EDT tomorrow to meet with House Speaker John Boehner, then start his address to a joint meeting of Congress in the House chamber shortly thereafter. Vice President Joe Biden, diplomats, justices, and Cabinet members are expected in a jam-packed chamber.

House members and senators each were allocated one ticket to distribute for seats in the House gallery to view the speech.

The speech also will be telecast on giant screens on the West Lawn of the Capitol, where up to 50,000 people with tickets are expected to view it.

House members were given 50 standing-room tickets for the West Lawn and senators were given 200. Lawmakers also were each allocated one ticket to distribute for viewing from the lower west terrace of the Capitol.

After his speech to Congress, the pope will appear on the Capitol balcony facing the National Mall to address the crowds.