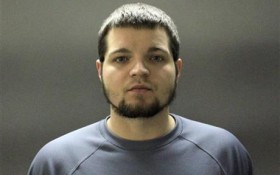 An Indiana man drank whiskey with the uncle of a 1-year-old girl and then waited until the family fell asleep before abducting, raping and killing the toddler, prosecutors said Monday in court documents.

A judge ordered that Parker remain jailed without bond and entered a not guilty plea for him during a Monday afternoon hearing. Parker appeared via video link from the county jail for the hearing.

Owen County Prosecutor Don VanDerMoere called the allegations against Parker “monstrous” and “atrocious” and as disturbing as he’s seen since becoming prosecutor in 2009.

“This is the first time in my tenure that I’ve seen grown law enforcement officers just wince in pain,” he said after Parker’s court hearing. “It’s just horrible.”

State police spokesman Sgt. Curt Durnil said the investigation wasn’t finished despite the charges against Parker. He said detectives could take several days or weeks to complete their work, but that more arrests weren’t expected Monday.

Shaylyn’s father and grandmother, Justin Ammerman and Tamera Morgan, were the last people known to have seen her late Tuesday. She had been staying at her father’s home under a joint custody arrangement with the girl’s mother; her grandmother and uncle also lived there.

Parker was drinking whiskey Tuesday night with Shaylyn’s uncle at the father’s home and abducted her in the early hours of Wednesday after other family members had fallen asleep, court documents said.

Parker denied involvement in Shaylyn’s disappearance when first questioned on Wednesday, but directed police to where her body was found near the White River outside of Gosport, about 40 miles southwest of Indianapolis.

An autopsy found Shaylyn suffered severe sexual trauma while she was alive and died from asphyxiation. Investigators reporting finding the girl’s body next to a tree and a burn pile nearby believed to contain her clothes and other evidence.

“Kyle kept saying the night was a haze and his memory was foggy on what happened,” the affidavit quoted Parker’s stepfather as saying.

Several hundred people attended a prayer vigil for Shaylyn at a Spencer park Friday evening. Her funeral is scheduled for Wednesday in Spencer.