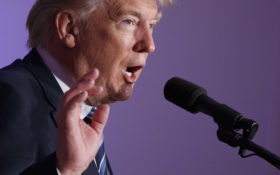 The race between Republican presidential candidate Donald Trump and rival Hillary Clinton is all tied up. The fight for the battleground states has become fierce, and with just a week before the general election, political analysts say the presidency is still up for grabs.

After this week’s speeches, Trump’s supporters believe that is not the case any longer.

At the opening of his newest hotel just blocks from the White House, Trump delivered a stirring address to the crowd Tuesday where he promised that “under budget, and ahead of schedule” will be the new normal for the U.S. government under his presidency. The short ten minute address left observers so hopeful, it had popular conservative news site The Drudge Report suggesting it was Trump’s greatest ever speech.

But could be Trump’s outreach to black voters in North Carolina that’s the most historic moment. Trump promised to be disenfranchised minorities “greatest champion” at a rally in North Carolina on Wednesday — and polls suggest Trump’s promise for a “New deal for black Americans” is a message that’s resonating with voters.

African American voters have traditionally voted heavily in favor of Democratic candidates — but aren’t backing Hillary Clinton with the same fervor they did President Barack Obama.

In fact, as The Horn News reported Wednesday, African American voters are threatening to abandon the Democratic party in record numbers.

“I have a message for all the doubters in Washington: America’s future belongs to the dreamers, not the cynics and not the critics,” Trump said. “African American citizens have sacrificed so much for our nation. They have fought and died in every war since the Revolution and from the pews and the picket lines, they’ve lifted up the conscience of our country in the long march for civil rights. Yet too many African-Americans have been left behind.”

Should that message boost Trump’s support to even 20 to 25 percent of the African American vote, as trends suggest it could, he’ll win the White House.